Our graduate: “The key points for a good career – hard work and constant development”

We pay a lot of attention to assisting our graduates' employment, collaborating with prospective employers, and the business community. One of the examples of our success in this field is our fruitful partnership with the EFKO Group. Many our graduates are now employees of this company. There they have an opportunity to apply their professional skills and knowledge, develop as specialists, and become real pros. This time we had a chance to talk to a graduate of the Faculty of Mathematics, and now a post-graduate student, Rostislav Kovalevsky, who, being just 25 years old, managed to become the Executive Director of Efko Kazakhstan. We had a nice talk about the university, the beginning of Rostislav’s career, and the opportunities he has got working at Efko. 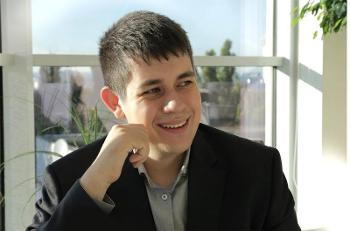 “The story of my studies at VSU is quite unusual. I loved Maths when I was a kid, and I actually wanted to study Mathematics at the University of Vienna. But to enter the University of Vienna you have to be a student of a corresponding faculty in Russia. That’s how I entered VSU. I studied in Vienna for 3 years, acquired a bachelor’s degree, and came back. But I still wanted to do science. So, two years later I enrolled on the master’s degree programme at VSU, and now I am a PhD student.”

Russia and Austria – differences in the education process

“Everyone in Austria can study at university without paying any fees, and there are no entrance exams. You can actually enrol in three faculties at the same time, attend all the classes, and then, after the first year, choose your major.  Another difference is that students in Vienna can choose the subjects they want to study and make their own programmes and timetables. There are also no exam sessions. Students pick exam dates themselves, no matter if it is the beginning or the end of the term. It can be hard for some students, because you need to have a really strong will, but, on the other hand, only those who are highly motivated get the diploma.”

Coming back to Voronezh

“It was really hard to adapt to the education process in Russia again. First of all the exams take place only during the exam session. Then, I had to work and study at the same time, which was also rather difficult. And it was at first hard to listen to all the lectures in Russian. But the good thing was that we had to solve a lot of theoretical problems, while in Vienna they concentrated more on practical things. One of the people who played a great role in my decision to keep on with science was the Dean of the Faculty of Mathematics Alexander Baev. He showed me, that it was much more interesting to study science and find practical applications for it, rather than concentrate on the theory only. I then enrolled on the Information Business Management courses held at VSU. There I learned how to make a business plan, present your project, as well as the basics of accounting and patent law. By the end of the courses, we had to present our own projects, and the best ones received an opportunity to take part in the Innovation Technology Business competition. The jury liked my project, and I even got a special prize at the competition.”

Looking for a job

“Upon my graduation, I, as everyone else, had to find a job. The first thing I learned, when I started looking for a job, was that I thought too much of myself. I thought I had all you need to find a great job - I had good marks, I had studied abroad, I spoke foreign languages. But I was wrong. I attended lots and lots of interviews. Some of the employers suggested attending short-term courses (and you had to pay for it), without which you couldn’t hope for any career opportunities. Other vacancies were even worse. Then I went for an interview with Efko company, and this was the beginning of a new stage in my life.” 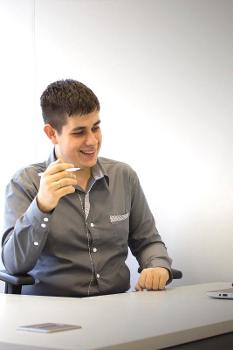 “I didn't think about any particular position at the company. In my CV I said that I was looking for a position as an analyst, as this was the closest to my profession.  And I thought I couldn’t hope for more then. But it was all very different at Efko. They assessed not only my skills, but they paid attention to my personal qualities, and my potential. They tried to imagine my future potential. Shortly after I started working at the company, I was involved - as a mathematician - in an interesting project. We had to use mathematical methods to forecast the total yield of sunflowers. Later, I used the results of this project for my PhD thesis. I worked hard. Taking part in various projects allowed me to learn and develop, and soon I was suggesting that I could help in solving certain problems. And my employers saw this. I was put in charge of a small department. And then I realised that I was in the right place. This was what I really wanted to do in life. I liked my job, I liked that there were various tasks and assignments in different parts of Russia, that I was able to provide my wife and daughter with all the best. My team and I worked well, so I was selected to take part in the special programme for employees with high potential. I attended a three-month course at Biryuch management school, after which I got the position of Executive Director of Efko Kazakhstan, which was then a new direction for the company’s development. This was a new stage of my career, a new period for me at the company.”

What is the key point for success?

“I won’t surprise you - its hard work and constant learning and development. Unfortunately, many young people who come to job interviews now don’t want to do it. They want to get a good position and a high salary right here and right now. But you’ve got to feel uncomfortable in order to make a good career. If you want to move on and get promoted, you ought to be ready to endure certain difficulties. First you work hard, and then you get rewarded. It doesn’t work the other way round. If you work hard, cope with problems and are ready to learn, then you will be given a chance. This is how it happens at Efko.”

Rostislav Kovalevsky has made rapid progress in his career thanks to his readiness to change, ability to learn and apply his knowledge, and the right choice of career. Any VSU student is welcome at Efko, just don’t lose your chance.