At the present time, an important task in Spintronics is development of a technology of production of structures with spin-dependent effects that could be used to produce a new type of memory device with faster response time and higher data density. Spintronics (from English “to spin”) shows magnetic properties of the electron, likewise Electronics shows if the electron has an electric charge. The above mentioned problem can be solved several ways – one of which is production of nanostructured structures on the basis of transition metals silicides Sin-Mem with the optical magnetic reversal effect.

A team of scientists from Voronezh State University, including Associate professor Alexandr Lazarev, Professor Boris Darinsky, Full Member of the Russian Academy of Sciences Alexandr Sigov, Associate professor Larisa Bitutskaya, and assistant Gevor Grigiryan have developed the project “Producing magnetic nanostructured transition metal silicides with the optical magnetic reversal effect for the new generation memory units”. Using a unique optical probe, invented in VSU, the researchers developed nanostructured films of silicides Sin-Mem on the surface of Si with magnetic response and the optical magnetic reversal effect. The research in this area has been carried out by the university’s scientists since 2008. 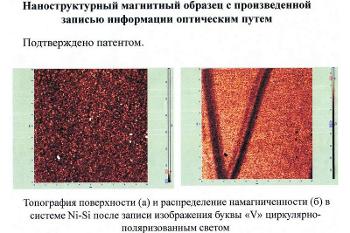 The suggested magnetic nanostructured materials with the optical magnetic reversal effect can be used to produce innovative memory storage and reproduction devices. One of the main advantages of such devices should be very high response time that is enabled by a new way of recording that has not been used in device-series. In tandem with optical magnetic reversal effect by means of circularly polarized light makes it possible to decrease the light spot to tens of nanometres, it allows production of devices that enable exclusively optical data recording with very high data density.

‘It is believed that by 2020, there will have been a transfer to new spintronic memory device units or so called MRAM – «Magnetic random access memory» that will cause a drastic change in computer devices. For example, memory access speed will be thousands of times higher than of the existing flash-memory and the re-recording resource will be a hundred thousand times larger. As the spintronic device uses the magnetic properties of electrons to transfer data, to create such devices it is necessary to develop ferromagnetic semiconductors with properties that can be controlled. That is why, at the present time, the existing problem of increasing memory capacity and speed of memory units of micro- and nanoelectronics combined with miniaturisation of these units is connected with development of new materials, and data recording and reading methods,’ said Gevorg Grigoryan who presented the project at the annual innovation projects competition held between Voronezh universities – "Innovation Cup". 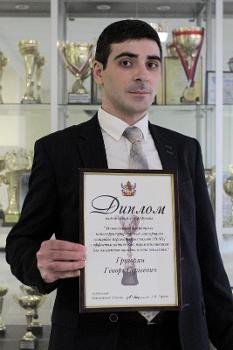 Silicides is a traditional material for silicon-based micro- and nanoelectronics technologies. The main task of the project is to get them in the nanostructured state that enables magnetic properties. Contemporary nanocluster structure production methods are not manufacture-oriented. The projects suggest employing a unique method of formation of Si-wafer-based Ni- and Co- silicide nanoclusters with magnetic properties. The product can be described as magnetic nanostructured films (average size of nanostructures ~50 nm) of Si-wafer-based Si-Ni, Si-Co with diameter up to 100 mm and with optical magnetic reversal effect. This project is unique for several reasons: for the first time it has been tasked to produce and use nanostructured transition metals silicides with the optical magnetic reversal effect; has developed a more promising method of formation of silicon-base nanostructured transition metals silicides; for the first time in the world has carried out optical data recording in Men-Sim-Si nanostructures.

The product under development is primarily aimed at the market of nanomaterials for photonics, microsystem engineering, and memory devices. The microsystem engineering market is a relatively young market that is far from the saturation point. First of all, it can be explained by introduction of microsystem engineering advances made in military space industry into auto industry, computer equipment and consumer electronics. At the present time, the application filed of microsystem engineering devices is continuously expanding, their production costs are reducing and the consumer properties are improving. The developed products are produced by means of an ecologically friendly technology using energy saving equipment and are safe to use. The products manufacturing involves creation of high-technology nanoindustry, nanomaterial industrial complex in the area of micro- and nanoelectronics.