Elena Alexeeva, holder of the Order of Academic Palms, on the translator’s profession, national stereotypes, and the similarity between France and Russia

The Head of the Department of French Philology of the Faculty of Romance and Germanic Philology and the Director of the Regional French Centre, Professor Elena Alexeeva was awarded the Ordre des Palmes académiques (Order of Academic Palms), the oldest state award in France. The original Palmes académiques was instituted by Napoleon to decorate university teachers and people associated with education. The order is conferred on French citizens for a great contribution to the development of the national language and culture. In rare cases, it is conferred to foreign scientists and teachers who promote the partnership between France and their own country. We took the opportunity to talk to Elena Alexeeva. 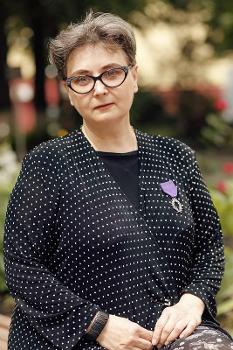 “When did you get the news about the order?”

“I got a letter from the French Ambassador telling me that the Prime Minister of France Jean Castex had approved the award.”

“Where did the award ceremony take place?”

“At the French Embassy in Moscow”.

“Does it make you feel special?”

“No, of course, not. It was more like a routine process. I went to Moscow, received the order, and came back home, back to work.”

“It’s always been the same with important events in my life. For example, with my doctoral thesis defence. It is a big event, isn't it? At that time, I worked in France as a visiting professor, so I had to defend my thesis during the holidays, i.e. at the end of December. I came home, defended my thesis, and on 2 January I was back in France, because it was the beginning of a new term. So it's only natural for me that such events are just a part of my job.”

“You are considered a recognised expert in translation studies.”

“Yes, it is one the areas of my scientific research, studying translation problems. But this is only possible because I work as a translator as well.”

“So, you research is based on your own experience.”

“Yes. I work at the university, but at the same time I do a lot of translation and interpreting.”

“What is the translation market like in Voronezh today?”

“It's pretty complicated, since everything depends on business interests. Translators serve businesses and organisations, so it is them who determine the market.”

“What does your job as a translator involve?”

“Business negotiations in relation to industry, economy, and agriculture.”

“Why did you choose this profession?”

“I think it all started when I was a schoolgirl. I went to a school which was prominent for French (it’s the I. S. Nikitin gymnasium now). By the way, last week I attended a graduation ceremony there and awarded a French diploma to the pupils of the bilingual Russian and French department opened by the French Embassy. VSU has an agreement with the French Embassy to hold examinations at the gymnasium. So, at the award ceremony I told the students the same things we are talking about right now: about the unique atmosphere at the school and the great teachers who opened up a whole new world to us. So, it was only natural that I kept learning French after school. I didn’t have to think twice.”

“Has the school managed to maintain this atmosphere?”

“Most fortunately, yes. We have seen various times. At some point the school managed to strengthen its partnership with the French Embassy. Then this partnership deteriorated. But the school, the university, and the embassy worked together to recover it. Today, the partnership flourishes, and I am glad that we keep our traditions. The school has a bilingual Russian and French department, where parallel to their main academic curriculum the pupils study social sciences and humanities in French. There used to be only two such departments in Russia: in Saint Petersburg and in Voronezh. Gradually, the embassy opened such departments in other cities as well, and now there are about twenty of them. But the Voronezh department is still the leading one. It is all very personal for me, because there are teachers at the gymnasium who taught me when I was a schoolgirl. There are also teachers who are my former students. I think it is the school that made me feel like I belong to two cultures, Russian and French. And I can’t say that either of the two prevails.”

“Let’s talk about one of your books ‘Non-finite verbs functioning as the second predicate in French’.”

“This is my first monograph. Later I published a more detailed one.”

“Based on the first one?”

“Yes, it was a continuation”.

“What is it about? The title is rather complicated. What does it mean in layman’s terms?”

“These books represent another area of my scientific interest. It is an area of pure linguistics, the semantic syntax. In other words, studying the structure of a language through the meaning of sentences. I perform these studies within the scientific school founded by my research supervisor, Professor Anatoly Lomov.”

“Sadly, he died not long ago.”

“Yes, three years ago. He supervised both my PhD research and my DSc studies.”

“Does the school live on?”

“Yes, I continue my studies in this area, only in French. Professor Lomov came up with is theory of semantic syntax as applied to the typology of sentences in Russian. For my PhD I was working with the material in Russian. Then he suggested that I should study the typology of sentences in French and focus on the predicate as the centre of a French sentence. This is how my DSc thesis and then the monograph appeared.”

“Do you have your own apprentices?”

“Yes, there are PhD students who develop the theory of semantic syntax in their theses. In other words, they develop the ideas of my teacher, Anatoly Lomov. The ideas that first appeared in the studies of the Russian language, but then developed to universal ideas on how the language functions. So, my students develop and prove this theory using the French language in their studies.”

“Who are the most important French writers at the moment?”

“In two years the Centre for Cooperation between Russia and France will celebrate it’s 30th anniversary. What do you think the preliminary results of its work will be?”

“I don’t think we’ll have time to think about the results. We always grow and develop.”

“Has the pandemic affected you?”

“Every year we hold several events: an annual regional school festival and contest “French Traditions in Russia”, a series of events “French Cultural Calendar”, and interregional student festivals and contests dedicated to International Francophonie Day. This year we has to do it online. Students made videos, and the Nikitin Library (our partner) published them on its website and counted the results of the voting among the audience. I should say we had quite a large number of participants. Students displayed their talents in French in various nominations: theatrical plays, musical plays, and songs. I think they miss such events. We also hold a number of events on behalf of the French Embassy: National Dictation and interregional competitions in the French language, and the International Day of French Language Teachers. During the pandemic we have also organised a number of online meetings with our international partners: other universities, the embassy, and diplomats. We are glad that modern technologies give us the opportunity to continue our cultural and educational activities.”

“Is it easy for Russians to find jobs in France, and vice versa?”

“I think it depends on the organisation, and joint projects in particular. I know a number of our graduates who work at French enterprises in Russia. They’ve made careers both in Russia and in France. It is not your nationality, it’s your expertise that is important.”

“Are there any French specialists working in Russia?”

“The French Embassy used to send lecturers from France to work at our French centre. This programme was closed by the Ministry for Foreign Affairs of France. But we still have our partners, i.e. French universities. So we visit them, and they come to us. We exchange ideas and organise master classes and conferences. It is much easier now that everything is online.”

“Have the sanctions affected you in any way?”

“No, I don’t think so. They were mostly economic. We still visit our partners and give lectures there. Recently, I’ve been to the University of Lille, and they asked me: “Do you feel the affect of the sanctions in Russia?” I said: “Nothing has changed.” “We thought so. It seems it’s only important for our politicians”. None of the sanctions has ever affected my relationships with my foreign colleagues. They are all very polite, tactful, and responsible people, and very good professionals. And they are all quite sincere. We openly discuss all the issues we have.”

“Talking about French people, are there any stereotypes that you would like to break?”

“I am definitely against any stereotypes. I believe there are interesting people in any country. So we should always look at a particular person and their qualities. But we can't judge the whole nation, because any nation consists of different people. When we think in stereotypes, we narrow our perception. For me personally, the most interesting thing about my French colleagues is their personality. The advantage of my profession is that it gives me an opportunity to meet a lot of very interesting people.”

“Today we see the tendency to protect the purity of the Russian language, to protect it from English borrowings, which we use in our speech too often. Do you see the same trend in France?”

Borrowings from the English language are everywhere, including in the French language. But France indeed has its own language policy. There are laws regulating the number (the percentage) of foreign films shown in cinemas and on TV. There is a law protecting the purity of the language. It is the responsibility of the French Academy.”

“Is there anything that Russian people could learn from the French?”

“I often remember when being a 20-year-old student (back in the USSR) I went to France together with the other best students. We attended various meetings, including one in the city hall, and the organisers asked us: “What surprised you most about France?” And I said quite frankly “Nothing”. The French themselves were surprised by my answer. But I explained that knew a lot about France. In fact, I knew so much about it, that nothing could actually surprise me. I had learnt it in advance. So, it’s difficult for me to say what we can learn.”

“You were absolutely sincere, weren’t you?”

“Yes, it was a natural response. Everything I saw in France, I had previously learnt about at school and university. My teachers told us so much about France that I could adapt really quickly, and I didn’t feel any kind of language or cultural barrier. I was comfortable in that environment, and I could communicate freely.”

“It all happened back in the USSR. Did the iron curtain interfere with your activities?”

“When was the last time you went to France? With the pandemic and all.”

“A year ago. Prior to the pandemic.”

“Do you miss France?”

“I still keep in touch with my colleagues. We meet online.”

“What is France for you personally?”

“I most often visit large cities during my business trips. But I still feel more comfortable in small French towns. The so-called "typical France". It is sometimes very similar to Russia. For example, you look out of the window on a train from Paris to Lille, and you see farms, villages, churches... it is very much like in Russia. I like the quiet France, the one not yet affected by globalisation.”