VSU Rector: “Rare books are back in Voronezh”

On 23 August, rare books returned to Voronezh State University from Germany were finally delivered to Building No. 3 (the “Red building”). During the occupation of Voronezh, the books from the university library were taken by the German troops. Until recently they were part of a private collection and remained in Germany. 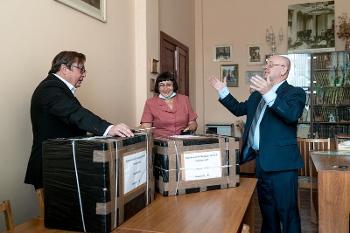 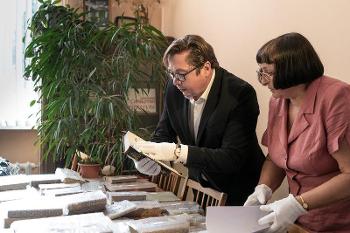 The ceremony was attended by VSU Rector Dmitry Endovitsky, Head of the Rare Book Section of VSU library Galina Lantsuzskaya (who accompanied the books on their way from Mpscow to Voronezh), and Director of the VSU library Arkady Minakov. He said, that among the 91 books handed back to VSU there are six volumes of a complete set of works by Alexander Pushkin published after the poet’s death. This edition was prepared by Pushkin’s friends: Zhukovsky, Vyazemsky, and other literary people. The publication was financed by the Russian Emperor, Nikolay I.

“Most of these books are valuable artefacts protected by the law”, said Galina Lantsuzskaya. 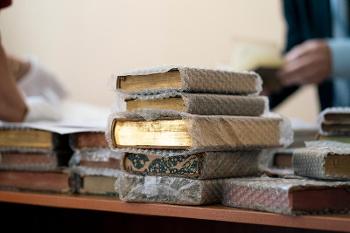 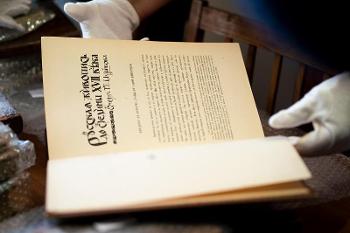 “The main issue was to arrange everything with the German party who were responsible for transporting the items of cultural heritage abroad. It would be impossible to simply carry the books across the border. We got an approval from the Russian Ministry of Foreign Affairs for our embassy in Germany and the administration of the Russian Culture and Research Centre in Berlin to arrange the transportation of the books to Russia. A VSU graduate and our authorised representative, Klaus-Dieter Heinze, was given the power of attorney to receive the books from our colleagues in Germany on behalf of the university. Another issue was to obtain approval to bring the books to Russia. I addressed Alexander Gusev, the Governor of the Voronezh Region. He in turn addressed the Minister of Culture and requested the permission to bring the books. So, we had to go through a lot of red tape to get these books to the Russian Federation. The whole process was supervised by our diplomats. Finally, the books are back in Voronezh State University. Both our Russian and German colleagues warned us that such invaluable books (some of them are the only copy in existence) may simply not make it to Voronezh. I.e. they may be taken by the Russian Academy of Sciences, Pushkin’s House, and other research centres. Therefore, we had a document compiled by Russian and German lawyers, which said that the former owner of the books, Hans-Erich Fry, gives them to Russia provided that they are delivered to Voronezh State University. So, the fact that this treasure was returned to Voronezh is of great political, cultural, and scientific importance”, said Dmitry Endovitsky.