VSU scientists know how to manipulate objects with your eyes

Today the human eye tracking analysis is of high priority for medicine, marketing and usability testing. One of the long-term objectives of the research is developing eye-operating systems for various devices that can be of high use for different electronic systems, i.e. 'smart houses' that are becoming an indispensable part of our life. Moreover, such technologies can help people with disabilities.

The work of a student of the Faculty of Computer Sciences of Voronezh State University 'Eye-tracking operating systems of external devices' which is being implemented under the supervision of the Head of the Laboratory of Medical Cybernetics, an Associate Professor Yaroslav Turovsky, is dedicated to creating such a system.

'Alongside with eye tracking systems brain-machine interfaces are becoming more and more important. They can be combined to improve the brain-machine and eye tracking interfaces' stability and quality. It makes it possible to greatly increase the user's data feed to the computer and substantially solve the most common problems – erroneous data and instability. As a result of such an approach a wireless operating system of various external devices and a full-scale 'virtual world' system can be created,' says Aleksandr Alekseyev who is involved in he project implementation. 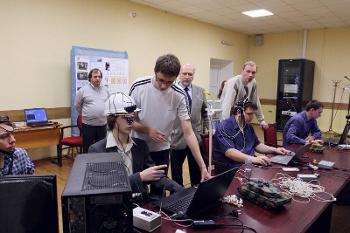 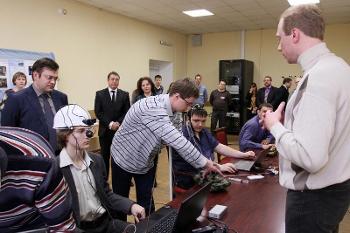 A VSU research team has created their own eye-tracking system: a relatively cheap and simple pupil detecting device and a software that identifies the gaze direction using the webcam data have been developed. A webcam looking at the eye area is used to identify the gaze direction. The webcam is fixed on a holder above the eye level and does not obscure the view. The system works as follows: the programme receives the image of the pupil, identifies its positioning data and interprets them into a command or a set of commands for the external device. Then the operator uses the brain-machine interface to accept or reject the commands that have been chosen. It nearly eliminates the possibility of errors in the system's operation. If the brain-machine interface finds a command that contradicts an earlier choice, the user will have to repeat the input procedure. In case of a command that confirms the user's choice the eye-tracking system component's data are sent to the operated device.

The key consumers of the system are rehabilitation institutions. The system can also be used for marketing research, for example to identify outdoor advertising that attracts most attention. Unlike its equivalents, the system is very simple to produce and operate and is also price-competitive. It can also be integrated into augmented and virtual reality devices the demand for which is steadily growing. Therefore, the system created by VSU researchers does not have many competitors in eye-tracking systems segment.