On January 20th, a concert was held at Voronezh Regional Philharmonic Hall as part of the “Siyai Zvezda” (Twinkle, Star!) festival with the University Chorus being one of the participants. It was a unique concert as it was dedicated to a single prayer – The Lord's Prayer – sung in various languages and in various manners – from classical to modern. 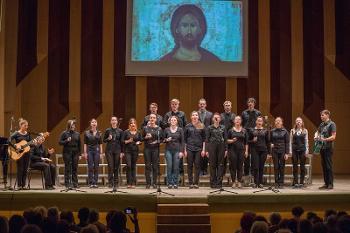 “Last year, Tatiana Izhogina, Head of the Voronezh branch of the Russian Choral Society, invited us to take part in the festival. For several months I was considering which language to choose, and then I accidentally came across the Lord's Prayer in Aramaic, the language of the Bible. The prayer, based on a mixture of Arabic and Byzantine music, together with its wonderful language, makes singing it a real pleasure. I then made a choral arrangement, and added guitars, maracas and shakers to make it sound more Arabian-like. The University Chorus includes international students singing in various languages. It was also a huge honour to take part in the festival and perform on one stage with professional choirs of Voronezh. We want to improve and develop our skills and we are glad to take any opportunity to perform in front of a large audience.

And this was really a daring task – we had to learn the Prayer by hart. We practically let the Aramaic language into our souls”, said Yulia Ponomarenko, the Director of the University Chorus.

“Although the pressure was really high, we felt quite comfortable, performing on the big stage. I was a bit nervous, but everyone else was so cheerful, that I didn’t worry about anything. I felt the energy that came from us to the audience. I even saw some of the people crying – they were so touched by our performance” said Valeria Tarancheva, a member of the Chorus.