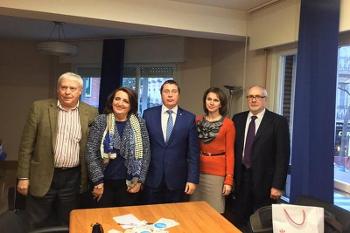 The visit was primarily aimed at presenting the programme entitled “Conducting Business in Russia: the political, cultural, and economic research into the Russian market” implemented at VSU, Universidad Rey Juan Carlos (Madrid, Spain) and the Liceus Academic Centre (Madrid, Spain), as well as at promoting the remote learning course in the Russian Language for Communication.

The goal of the programme “Conducting Business in Russia: the political, cultural, and economic research into the Russian market” is to shape the Spanish-speaking students’ comprehensive vision of the Russian Federation, its population, history and ethnography, economics and politics, science and culture, ecology and geography, law and religion, language and literature, traditions and values. The graduates of the programme will have the knowledge and the skills needed for their future career that will be connected with Russia in some way.

– It is the first time the university has encountered projects like this, and it is great experience for us. The programme we are starting with the University of San Carlos is absolutely unique, as it places an emphasis on three potential segments of the education market. The first one is the Spanish specialists in the area of international business, planning to promote their companies in Russia but lacking the knowledge of the country’s political and economic features, its history, mentality, or language. The second segment is the various international hotel associations in Spanish-speaking countries frequented by Russian tourists. The third segment is the Russian-speaking diaspora in these countries that are interested in getting a high-quality education. The University of San Carlos is a well-known university with top positions in all international rankings. Obtaining a diploma from this university is considered highly prestigious. The programme is not only aimed at Spain but is also intended for the Iberian countries. A key feature of the programme is that most of the students do not speak Russian. That is why we have collaborated with our colleagues from the University of San Carlos to develop an online platform “Russian Language for Communication. Elementary Level”, said VSU Rector Professor Dmitry Endovitsky. 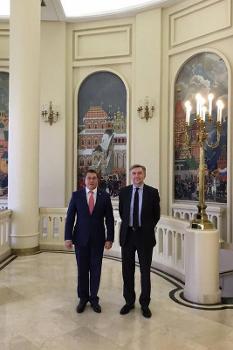 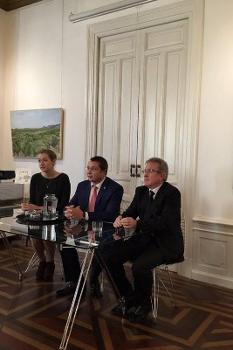 On 15th February, VSU representatives met Ambassador Extraordinary and Plenipotentiary of the Russian Federation to Spain Yuri Korchagin and First Secretary Sergey Bondarenko, and discussed the academic programme “Conducting Business in Russia: the political, cultural, and economic research into the Russian market”. The Embassy of the Russian Federation in Spain has assisted in promoting the programme to a great extent. In addition, the VSU delegation representatives met the members of a well-known Spanish club of executives – Club 567, where they presented the programme to the representatives of the business community. The highly productive club members (mostly in theirs, 50s, and 60s) are the people who have a significant impact on the country’s economy. The presentation resulted in the VSU delegation obtaining the commitment of the Spanish business community to support the academic programme. After that, the representatives of Voronezh State University made a major presentation at the Casa Grande Icon Museum to the representatives of the academic community, the business community, and educational companies, including the President of the ABY educational group Luis Fuentes Afuera. The presentation attracted a lot of interest from the audience, where they learned about how to do business in Russia and get a master’s degree from the University of San Carlos and a diploma of professional retraining issued by a Russian university.

On 16th February, the VSU delegation met the Rector of the University of San Carlos Suárez Bilbao and the First Secretary of the Embassy of the Russian Federation in Spain Sergey Bondarenko. The negotiations resulted in a number of agreements, including one to start the programme on 1st October 2016. In order to attract students, a Summer School is to be organized at Voronezh State University for up to 45 Spanish students. They will learn about Russian culture, as well as about studying at VSU and the accommodation.

“We have made a decision about joint applications to participate in Tempus, Erasmus Mundus, and Erasmus+ programmes. Also, we plan to sign an academic exchange agreement as part of the Erasmus Mundus project. Furthermore, the Rector of the Spanish university has put forward an initiative to start a bachelor’s programme in Russian Philology at the University of San Carlos.  The University of San Carlos sees the high potential of Voronezh State University in this sphere” stressed Dmitry Endovitsky. 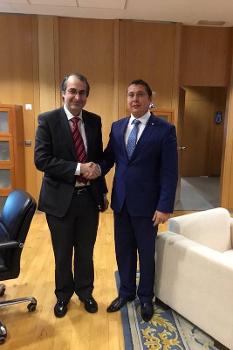 On 16th February, negotiations were held with the Director of the Pushkin Foundation Alexander Chernosvitov, who also supported the idea of the academic programme, and promised to assist in recruiting the first group of students.

On 17th February, during the negotiations with the ANCED National Association of the Centres of Electronic and Distance Learning, VSU Rector Dmitry Endovitsky signed a collaboration agreement with the President of the Association regarding the promotion of the online platform “Russian Virtual Classroom” in Spain. The association representatives state that the online platform developed by the VSU scholars is of very high quality. 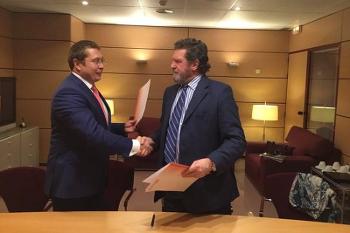 During the whole visit, the University delegation was accompanied by Pilar Moreno – a strategic partner of Voronezh State University and the University of San Carlos, Director of the Liceus Academic Centre.