Victory of VSU students in the 8th International Physicists' Tournament

Between 17 and 23 April, the 8th International Physicists' Tournament took place in Paris. During the competition, Russia was represented by the team Rubikon, comprised of students from Voronezh State University and Voronezh State University of Architecture and Civil Engineering. Surviving close competition in the qualifying physical battles and in the final our team took third place and became one of the three best teams and eighteen best students of the world. First place was awarded to a team from France and second to a team from Poland. 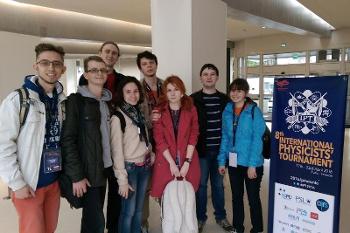 The following students represented our country at the international tournament:

The supervisors of the team are: Nikolay Lysenko, a first year postgraduate student of the Faculty of Physics of Voronezh State University and Vsevolod Zhdanov, a Physics teacher from school № 12. 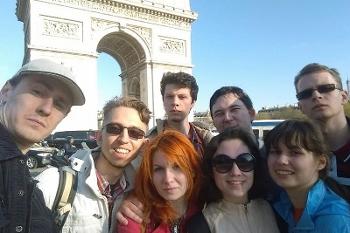 It was a long road to the International Physicists' Tournament. The first step on the road was the victory of the team at the All-Russian Students' Tournament of Physicists 2015. According to Nikolay Lysenko, Voronezh students are highly competitive among the students of the best international universities in their knowledge of Physics:

'We are just as good at Physics as the teams from international universities, and sometimes we are even better. The final of the tournament had the elements of a show, whereas our students rather delved into the problem and applied different laws and formula. They always considered different ways of solving problems. Such an approach was a definite advantage during the qualifying battles. After the third qualifying battle we were second, we showed an absolutely different level of solving tasks. However, to win in the final you need to be spectacular, whereas our team paid more attention to the scientific component of the event. Some time ago we competed against a team from the Moscow Institute of Physics and Technology and won by a small margin in a national tournament. Then we had an idea to join our teams to take part in the international tournament. We suggested it to the captain of our team. However the other team refused and it was absolutely right. I am very thankful to them for that decision.'

Nikolay also emphasized that third place is a very good result for the team. The Voronezh team competed with very strong competitors – for example, the teams from Great Britain, Germany, and the second place team from France. They showed very high level of skills and knowledge when they offered their reviews, defended their projects, and opposed other projects. Nevertheless, our students managed to beat them and get into the final of the international tournament. 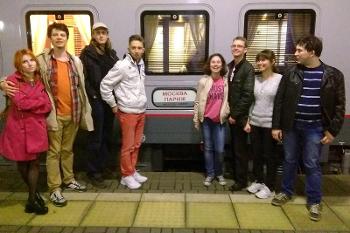 'Frankly speaking, when they announced that we got to the final I was not thinking that we are representing Voronezh and Voronezh State University. I just felt proud for our team. I was thinking how cool it was to get into the final of an international tournament. And only when the final was over I realised that we represented Russia. I felt the support of Voronezh, and of our university. I knew that everybody was watching us and was rooting for us. I would like to mention the names of the people who helped us go this far: the rector of Voronezh State University, Dmitry Endovitsky, the assistant of the rector, Sergey Kamshilin, the dean of the Faculty of Physics, Anatoly Bobreshov, associate professor of the Department of Solid-State Physics and Nanostructures, Sergey Turistchev, associate professor of the Department of Mathematical Physics, Dmithry Dorofeyev, lecturer of the Department of Mathematical Physics, Andrey Malykhin, and postgraduate student of the Department of Radiophysics, Alexander Kharin,' said Nikolay Lysenko.

When our students returned home they were welcomed by VSU rector, Dmitry Endovitsky, and professor of the Faculty of Physics, Evelina Domashevskaya:

"You showed very good results at the international tournament. And this experience is very valuable. You are promoting our university's academic reputation that has been built for generations on the world stage. We are very proud to hear the name of VSU pronounced with a lot of respect and to have such a solid team at our university," said Dmitry Endovitsky.

'You are the new generation of intellectual elite who share in the responsibility for the world's fate. Your victory is a source of pride for all of us,' said Evelina Domashevskaya. 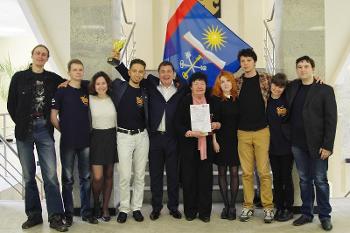 We also had a chance to talk to the members of the team and to learn what they were feeling the very first moments after the results had been announced. We also asked them how it happened that they started to participate in physics competitions.

'To tell the truth, I was expecting us to win from the very beginning. Deep inside, I was sure that we would get into the final at the very least. We prepared our problems very close to perfection. The tournament was also a wonderful opportunity to practice English. Additionally, in every battle you got to play the role of opponent and reviewer and it helped to develop our negotiation skills. How did I start to participate in physics competitions? I was a schoolgirl then. I studied in the tenth form. A friend of mine called me and asked: 'Would you like to visit Novosibirsk? Then you should join our team!' I did not go to Novosibirsk that time, but became fond of tournaments,' said Alexandra Maslakova.

'I did not immediately understand that we won. In the same way, at the beginning of the tournament I did not immediately realise that it was a competition of a higher level compared to the ones we had taken part in. It was not until the drawing procedure and the moment when the battle table started to fill when I realised that we were not going to compete with Chelyabinsk or Belgorod but with Germany and Columbia. It was a very strong feeling and I felt the burden of responsibility. Our participation in the tournament provided us with a huge experience of participating in international scientific debates, as well as experience of communicating with representatives of different countries and cultures. It was really exciting to see how three teams from different countries discussed problems and managed to come to an agreement. An opportunity to practice English while participating in scientific battles or official discussions was also very important for me,' said Sergey Voistchev. 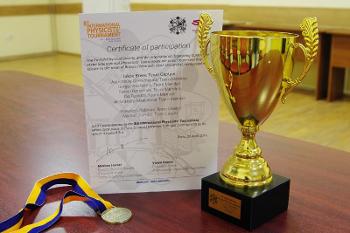