THE World University Rankings – a unique case of VSU

On 21 September, the Times Higher Education magazine together with the Thomson Reuters corporation announced the results of this year's THE World University Rankings. The universities included in the list are evaluated by consistent methodology. 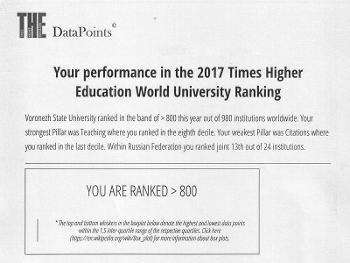 “The fact that VSU was included in the Times Higher Education World University Rankings is outstanding, it is a huge step forward for both the university and the Voronezh region. I dare say that the case of VSU is a unique one, and there is certain tendency here. It is no longer surprising for education experts that VSU has achieved a stable position in the QS Rankings, but being included in the THE rankings is really something out of the ordinary, something that marks our development path as being different from that of other universities in Russia. VSU – a university with no state support – was ranked 13th among the other Russian universities, which means that the results of the rankings should be thoroughly analysed. Such an analysis will help to evaluate the effectiveness of the state programme for promoting Russian universities,” – said VSU Rector Dmitry Endovitsky.