In March 2017, Voronezh State University and ISC Paris Business school launched the double degree programme “General Management” within Executive MBA professional retraining. The graduates of the programme will get two diplomas: “Executive MBA” diploma of ISC Paris Business school and “Executive MBA” diploma of the VSU Business School. Such a project in the area of business education demonstrates the high international academic profile and good quality of education services at VSU. 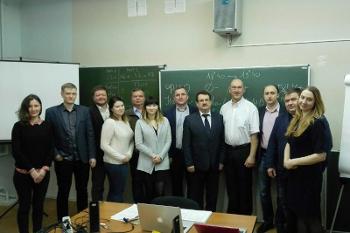 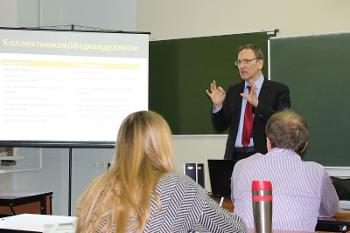 The first lectures that were part of the programme were given between 10 and 22 April. Two lecturers of ISC Paris Business School were invited to give lectures for students of the joint programme “General Management”. The students include senior officers of various Voronezh enterprises. Ramon Shivre gave several lectures on “Communication management”, and talked about the basic communication principles and their applications, management and leadership, intercultural communication, and communication between people of different generations. The lectures were practice-oriented and included active teaching methods. Ramon Shivre praised the students for being highly motivated and appreciated the quality of translation performed by Evgeniya Lapaeva, lecturer of the Department of French Philology of the Faculty of Romance and Germanic Philology.

Vyacheslav Avitunsky gave a series of lectures and workshops on “Cross-cultural management”. During his classes the students improved their intercultural communication competence, analysed and solved a number of professional problems. Our colleagues from France were pleased to see that the students were interested, and could analyse European entrepreneurship principles as applied to their own enterprises.

Vyacheslav Avitunsky also organised several workshops for students of the Faculty of International Relations and the Faculty of Romance and Germanic Philology. The students had an opportunity to take part in a business game “European Parliament meeting on migrant crisis” organised within the framework of the Erasmus+ Jean Monnet project “European identity in terms of language policy of the European Union” implemented by the Department of French Philology. Vyacheslav Avitunsky actively participated in the discussion and commented on the presentations prepared by the students. He also said that their professional level was very high. Apart from organising the business game, Vyacheslav Avitunsky also gave two lectures for students of the Department of French Philology on the problems of intercultural communication and the principles of functioning of the European Union. All the lectures and workshops were based on active teaching methods.

Vyacheslav Avitunsky was amused by the level of French that our students demonstrated, and praised the work of the lecturers of the Faculty of Romance and Germanic Philology. He called the faculty a “Francophonie island” in the very heart of Russia, and said that its highly motivated students supervised by Elena Alexeeva, head of the department, make a great contribution to the development of Russian-French partnership.

Vyacheslav Avitunsky also held a workshop in Russian at the Faculty of International Relations on “Cross-cultural management - a bridge between nations and cultures”. Students had an opportunity to demonstrate their competence in solving a number of professional problems.

Vyacheslav Avitunsky said that his visit to VSU was highly effective, as the lecturers and the students demonstrated high professional level and are eager to perceive the process of internationalisation of higher education.