Between 21 and 24 March, a coordination meeting of the Erasmus+ COMPLETE project “Creating Employment Competences and Skills Development Centres (CCED)” was held at the Faculty of Logistics the University of Maribor (Slovenia).

The COMPLETE project was supported as a part of the Erasmus+ programme – “Capacity Building in Higher Education” which is a follow-up of the Tempus programme. All in all, 57 project applications with participation of Russian organisations and universities were submitted and 22 were approved for implementation in 2015–2018, including the Erasmus+ project, COMPLETE. The consortium includes five Russian universities, three universities from Kazakhstan, the High school of business (FHM), Piraeus University of Applied Sciences (Technological Education Institute of Piraeus, Piraeus, Greece), the University of Maribor (Slovenia), and the Institute of further education, labour market, and social policy (Germany). The project is aimed at creating centres that will offer consultations on bachelor’s and master’s students training with a competency-based approach and will deal with employment issues. The creation of such centres is determined by the fact that universities in Russia and Kazakhstan have no special programmes contributing to employment of graduates and cooperation between employers and universities. 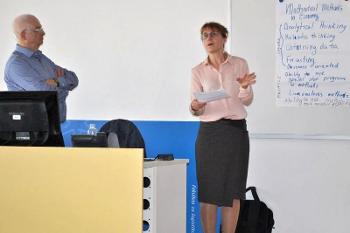 Voronezh State University was represented at the coordination meeting by Irina Shylova, lecturer of the Department of International Economics and International Business of the Faculty of International Relations. The programme of the first two days of the meeting included discussion of the concepts of CCED centres developed in Kazakhstan and in Russia, as well as CCED models introduced at partner universities. The concept suggested by our colleagues from Kazakhstan focused on the theoretical aspects of the introduction of the competency-based approach to education, as well as to the integration of CCED centres into the university system and into higher education system in general. In their presentations of CCED models, our colleagues described the structure of the proposed centres and the objectives of the introduction of the competency-based approach to education. CCED models presented by other Russian universities conformed to the general idea of the meeting. Most universities see CCED centres as institutions that will combine the existing forms of communication with graduates and labour market representatives (career development centres, further education faculties, forms of communication with enterprises adapted by certain faculties, etc.) in order to coordinate the activities in this area.

EU partners presented their projects on the second day of the meeting. They performed a detailed analysis of the performance of career development centres of the University of Maribor and a partner university in Greece. They also talked about the international accreditation of academic programmes.

On 23 March, a workshop was held where the participants were to develop an education programme in accordance with a competency-based approach. The workshop was moderated by Dr. Dietmar Chur, former head of the education centre of Heidelberg University (Germany). The workshop also discussed the objectives, aims, and functions of CCED centres.