Ambassador Extraordinary and Plenipotentiary of the USA talks about education, politics, and business

Voronezh State University continues its tradition of public meetings with famous scientists, cultural leaders, and politicians. On 8 June, a delegation of the embassy of the USA headed by the Ambassador Extraordinary and Plenipotentiary of the USA, John F. Tefft, was in VSU as a part of a two-day visit to Voronezh. The ambassador met the students of the Faculty of Journalism, the Faculty of International Relations, and the Faculty of Military Education.

“Our university has always attracted outstanding people: in recent years it has been visited six times by ambassadors from Ireland, twice by the ambassador of Germany, we also received ambassadors of Japan, Switzerland, Hungary, and Canada. Just a few days ago, the United States Secretary of State, Rex Tillerson, said that President Donald Trump instructed him to improve relations with Russia. This is the background for the visit of his Excellency John F. Tefft to Voronezh State University. Our university has wide and close connections with many educational institutions in the United States. We conduct major joint research in the area of postgenome studies with Albert Einstein College of Medicine in New York, we have academic projects and double-degree programmes. For over a decade, we cooperated with the United States Military Academy at West Point. This cooperation was very successful”. 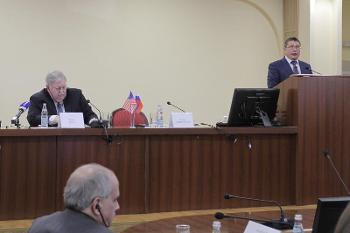 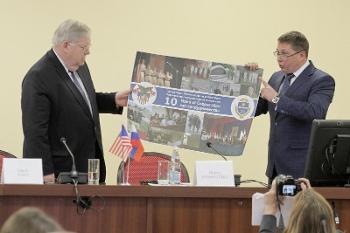 In his response, John F. Tefft thanked the university administration for a warm welcome. He said that it was his second visit to Voronezh:

“Today, we visited the memorial to the children who died in the air strike during the Great Patriotic War. Americans honour the memories of that time. My father and my father in law took part in the second world war and Voronezh has always been an example of valour of the Soviet soldiers for me”. 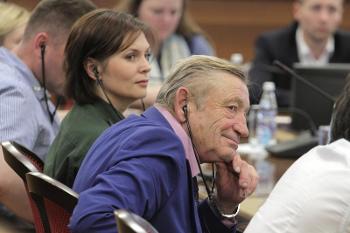 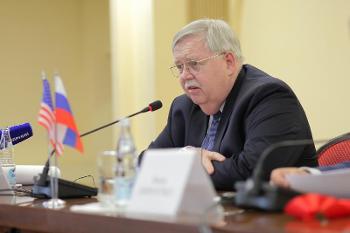 The Ambassador talked about his visits to the regional agricultural companies – the head of the American diplomatic mission came to Voronezh to highlight the fact that American-Russian cooperation in agriculture contributes to the creation of work places and economic growth in both countries. He also highly praised the technology level of production. At VSU he received detailed information about cooperation between universities from Voronezh and the USA.

“I visit Russian cities a lot to promote relations between our nations. Although our countries seriously disagree on a number of issues, I believe that on the level of ordinary people, American-Russian relations have considerably improved for the last 25 years. Many personal relationships have been formed. This is the crucial point in developing of relationships between states, which can have its ups and downs. I have been in the diplomatic service for 46 years and I have an optimistic view of life”.

John F. Tefft emphasized that the audience of the meeting – students of the Faculty of Journalism and journalists – was particularly important. In his opinion, “journalism benefits society, and professional, highly objective, and free journalism is the foundation of a democratic society”. 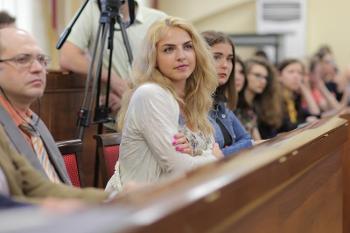 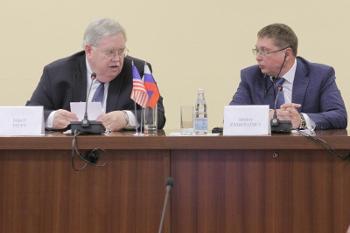 A short talk by the diplomat was followed by questions from the audience. Certainly, the students were interested to hear about the prospects of American-Russian relations at the highest level and opportunities for building a dialogue aimed at solving global problems. 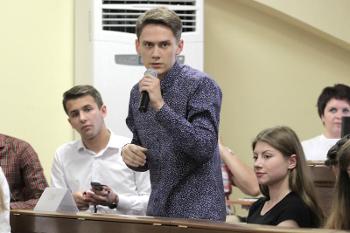 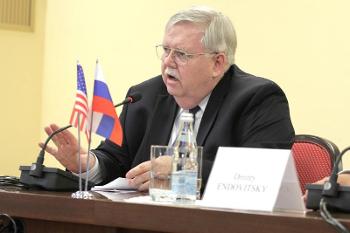 “My mission of a diplomat is to do my best to improve relations between the countries. It is very important for us to start negotiations and to look for solutions to global disagreements. The problems we are experiencing now have been here for a long time. You need time to create a foundation for new relations and now, we are exactly at this stage”.

The audience expressed its concern on how the decision of the US administration to reduce the budget for professional exchanges and scholarships is going to affect academic exchange programmes.

“I support all academic exchange programmes. They help create mutual understanding and ties between nations. Indeed, there is a suggestion to reduce expenses. However, some influential senators, on the contrary, claim that they will try to avoid reductions in financing,” explained his Excellency John F. Tefft.

A student from the Military Training Centre (specialisation “War Journalism”) drew the attention of the ambassador to the long lasting fruitful cooperation between VSU and the United States Military Academy at West Point and wondered whether this cooperation was going to be renewed and if the USA has an educational institution that trains war journalists.

“I hope that this cooperation will continue. I should say that the number of West Point graduates involved in journalism is not very high. The press service of the embassy has more detailed information on the issue and we will try to provide it to you,” promised the diplomat. 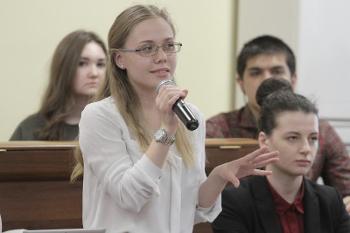 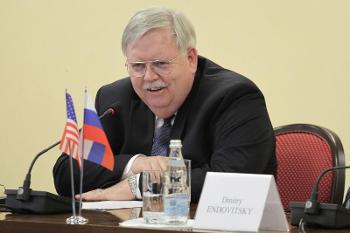 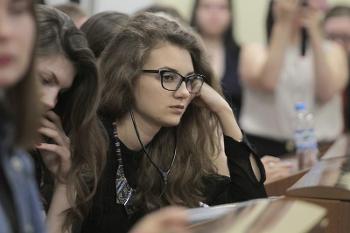 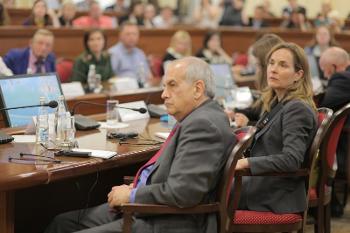 One of the questions was about the meeting of the diplomat with the journalist community even though his visit was aimed at the agricultural companies of the region. The journalists wanted to know how the meetings in Voronezh can influence the information policy of the USA regarding Russia.

“When I was planning my visit, I was told about the university and the Faculty of Journalism. I am also going to visit the synagogue as we support freedom of religion. I am very fond of travelling beyond Moscow. Such visits charge me with energy and I get a chance to learn what ordinary people think,” said his Excellency John F. Tefft.

The director of the International Project and Programme Centre, Alla Akulshina, asked about international research programmes. She noticed that universities from Russia and the USA have similar level of participation in such programmes and asked about the creation of joint research projects that could help find solutions to global problems.

“We differ from Europe in the aspect that the functions of eduction management do not belong to the federal level but to the local authorities. Without a doubt, there are a lot of opportunities for cooperation and many relations are created on a personal level and they need to be expanded,” answered his Excellency John F. Tefft.

“With the fall of the USSR, interest in the Russian language declined. I think, now, fortunately, the number of people who study Russian is increasing again. It is a good sign. The more Russians study English and the other way round the more Americans do internships in Russia, the more successful we will be in building long-term relations,” said the ambassador of the USA to Russia. 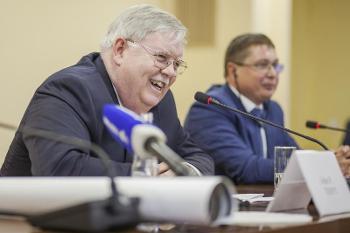 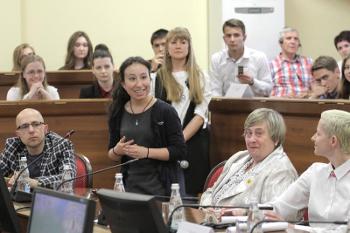 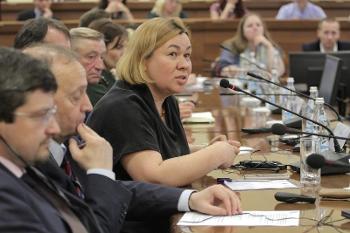 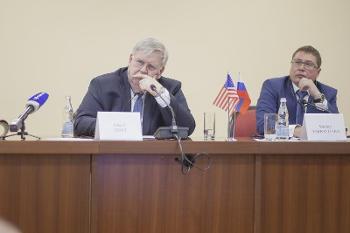 Continuing the discussion, the Rector of VSU, Dmitry Endovitsky, offered the diplomat to support the creation of a Russian Language Centre in the USA. His Excellency John F. Tefft promised to tell his colleagues in Washington about the initiative.

The visit of the ambassador to Voronezh State University concluded with a visit to the VSU Book museum. 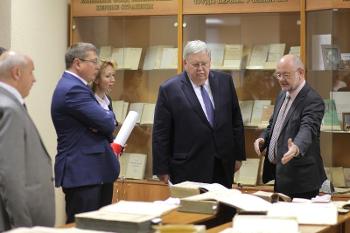 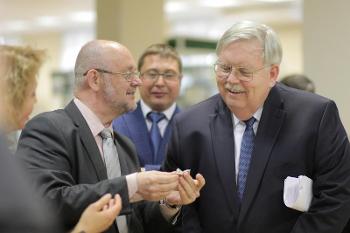