The national karate tournament among cadets and juniors “Aspirations of Russia” – 2017 concluded in Saint Petersburg. A student of the Law Faculty of Voronezh State University and an IRBIS TEAM RUSSIA athlete, Alexandra Lidzhieva, became the bronze winner of the national tournament. 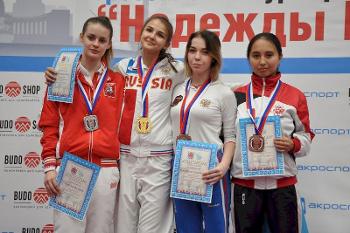 The qualifying competitions gathered about a thousand athletes from 52 regions of Russia. Alexandra Lidzhieva easily made it to the semi-final in the weight class up to 50 kg where she had to compete with an athlete from Moscow, Valeria Sergeyeva. Alexandra made a mistake which was decisive. With a score of 1:1, according to the rule regarding the first point received, the victory was granted to the representative of Moscow. However, Alexandra easily defeated her opponents when fighting for the bronze prize and took the third spot of the podium.