Student creates a program which can make any surface interactive

Today, there is a growing demand in computer vision programs that are used to recognise faces, to control computers with hand gestures, and to recognise objects in an image. Interactive surfaces are also becoming more and more popular.

A first year student of the Faculty of Applied Mathematics, Informatics, and Mechanics of Voronezh State University, Mechislav Prinev, has been working in this advanced area. He developed a project software complex for creating SmartWall non-electronic interactive surfaces and gadgets. The software makes it possible to control a computer using non-electronic surfaces such as walls, paper, or a table surface. The software uses computer vision techniques to transform any surface into an interactive element without sensing technologies. To run the program you only need an ordinary average performance webcam and a computer. 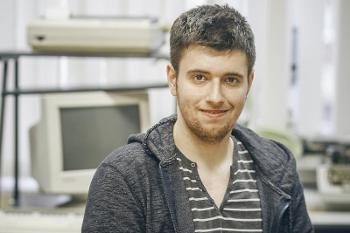 Today, there are many different computer vision libraries that help solve the segmentation problem, i.e. to separate specified fragments in an image. However, they are not very efficient when processing noisy images. SmartWall uses a method for the segmentation of noisy images with dynamic threshold values for the transfer of grayscale images to monochrome ones by means of continued augmentation of the pixel brightness value. When the program can no longer segment the specified image, the threshold changing stops. This method can be used to process low quality images without using neuronets and cumbersome calculations. The program does not require costly equipment and allows creating interactive areas on surfaces of various colour and texture and images made by projection.

“A stencil is applied to the surface. It helps to separate the specified areas. And when the image is captured by the webcam, the stencil is removed. When the image segmentation is over the user can select the necessary fragments and set the order of interactive areas on the surface. When you press them the computer performs the specified tasks,” said Mechislav Prinev.

The introduction of the software will considerably lower the cost of interactive devices by abandoning costly sensor surfaces. SmartWall can be applied in many areas. For example, it can be used for various intercom systems and alarm buttons, as disposable sterile gadgets to be used in contaminated areas, in medicine, in smart house systems and to create interactive shop windows in shops and shopping malls without using sensor surfaces. The program is especially important for rehabilitation centres for disabled children where it can be used to equip sensor rooms and for educational institutions where it can be used as educational content and as an alternative to touch whiteboards.

A number of large companies in Voronezh have already expressed their interest in Mechislav Prinev’s development. Also it has been highly praised by the members of the Board of Trustees of Voronezh State University.