A traveller from Voronezh talks about modern-day primitive tribes

On 17 February, an artistic meeting with Alexey Saniev was held at the Faculty of History of Voronezh State University. Alexey Saniev is a famous traveller, the creator of the Big ecological track of Voronezh, and the head of the travellers’ club “Territoria 36”. The event was dedicated to the university’s anniversary. It was organised by the staff of the University’s Archaeological Museum in cooperation with representatives of the Kostyenki nature reserve. 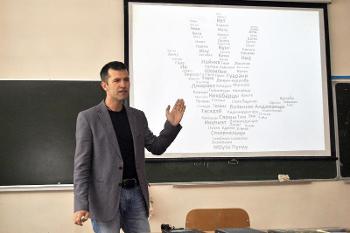 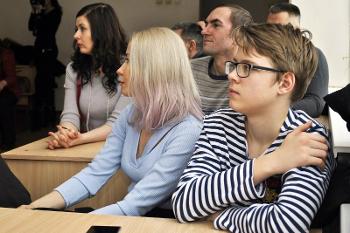 Among the participants of the event were students, the university’s staff and travel lovers. The lecture was dedicated to primitive tribes of the ancient times and the modern age. The speaker drew an analogy between the excavations of the palaeolithic sites in the settlement Kostyenki in the Voronezh region and tools of the tribes of the Andaman and Nicobar islands, situated within the territory of India.

Alexey Saniev’s expedition took place this January and February. Its main goal was the search of a Russian sailor who had disappeared without a trace during a voyage near the deserted Nicobar islands. This remote area of the Indian ocean is considered to be almost inaccessible. Some of the islands are inhabited by largely uncontacted tribes, and contact with civilization are restricted to research goals. The Andaman and Nicobar islands were open for visitors only 16 years ago.

The tribes that live on the islands are still hunter-gatherer societies. Alexey told the audience that by the mid 19th century the Andaman islands were inhabited by 12 Negroid tribes with overall number of 5 to 8 thousand people. Most of them have already died out. Among the survivors are the Jarawas, the Onge, the Great Andamanese, and the Sentinelese. Their population is fewer than one thousand people. The Nicobar islands are inhabited by the Nicobarese people and Shompen (fewer than 50 people). The total number of uncontacted tribes is over 100.

‘We can also see a tendency – some tribes by choice avoid contact with the civilization. Some tribes that have been introduced to Coke and other things but prefer to retreat into the forest and live according to the laws of their ancestors. Hunter-gatherers never stay in the same place, they have always depended on land and biological resources. And the resources are getting scarce. As a result the tribes are endangered,’ explained Alexey Saniev. 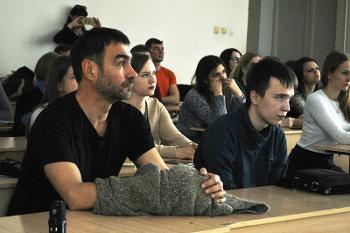 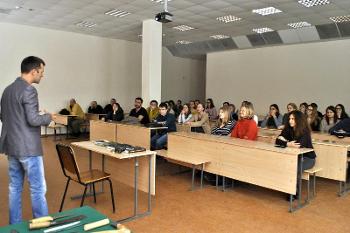 The tribes that live on the Andaman islands rejoice at the sun, the sunrise, and the sunset every day. Alexey has his own explanation for the tribes’ migrations:

‘People who migrated from Africa to Southwestern Asia and the Middle East were following the sun. This wish to try and look over the horizon, to travel and see where the sun rises, made people migrate. Then they went different ways. They moved along the shore. It’s hard to imagine that we can only evaluate the people who lived a long time ago in Kostyenki by artefacts that are found deep in the ground and the people that inhabit the Andaman islands still live there. The Andamanese are considered to be forest dwellers.’

According to the lecturer, another interesting group is the Sentinelese, the inhabitants of the Sentinel island. It has not been visited by people from the civilized world yet. Nobody knows how big its population is, but scientists estimate that it may be just a few hundreds. Communication with visitors is strictly taboo for the tribe and that is why they kill them. Last time it happened was in 2002 when fishermen landed on the island and the aborigines killed them. That is how the tribes protect their territory. During his last expedition, Alexey watched the island from a plane and studied the aerial footage. The islanders dismantled two container ships. That is how they got access to iron which they now use to make arrow heads. They did not use to know neither metal, nor fire. Throughout their existence, the Sentinelese have not changed the environment they live in in any significant way. They have not cut down any forests, they have not burnt out any land. Their population has always been very stable which is a puzzle for the scientific community. Decisions about marriages can only be made by older relatives in the tribe. 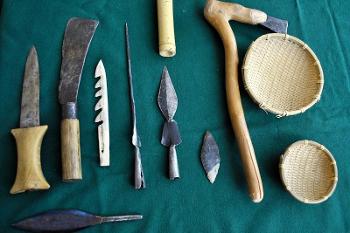 The inhabitants of the Nicobar islands are more advanced these days. They can make boats from wood. For this they use primitive instruments. They have also recently started wearing modern clothes. Their staple food is coconuts and pork. The islanders can weave baskets. Everything they have is provided by nature. Alexey had a chance to meet representatives of the Nicobar.

He told the audience about some peculiarities of the people living on the Indian islands. All tribes like the colour red. The explanation for that may be that it reminds them of the sunset. They also paint their faces and bodies with clay which protects them from insects. They have special burial rites.

‘Apparently, living in harmony with nature helps the tribes to survive. They do not overpopulate their islands, they do not die of starvation, they have not hunted the pigs and birds to extinction, and they look quite healthy,’ said Alexey Saniev as he concluded his lecture.

After the lecture, the audience had a chance to study artefacts from the Kostyenki museum and objects that the traveller had gathered during his expeditions. They also could visit the university’s archaeological museum. 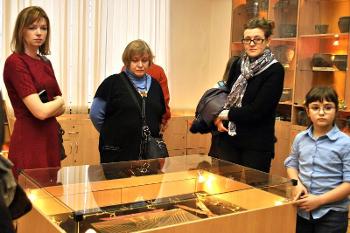 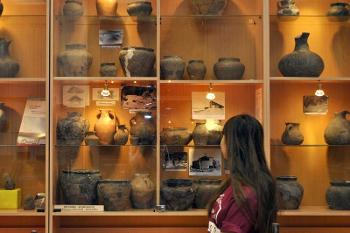