On 17 July, sculptor Alexey Dikunov, a member of the Union of Moscow Artists, presented to VSU members, representatives of the Voronezh government, and the professional community two sculptures devoted to Nobel Prize laureates in Literature – Ivan Bunin and Mikhail Sholokhov. The sculptures will be erected in the Park of Scientists that will open in September. The sculptures are made in the form of bookshelves with the most famous short stories and novels by Ivan Bunin and Mikhail Sholokhov: “The Village”, “Antonov Apples”, “Light Breathing”, “They Fought for Their Country”, “Harvest on the Don”, “Quietly Flows the Don”, etc. There are two years on the sculptures: 1933 and 1965. These are the years when the two writers won their Noble Prizes. The pages of the books also present two quotes, in accordance with the initial design. 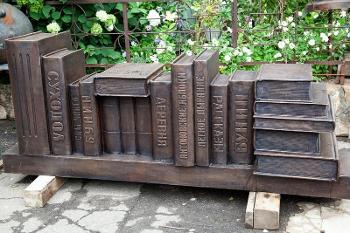 The sculptures were highly praised. The special committee assessing the sculptures decided not to mark them with QR-codes as was originally intended, because the sculptures are made of bronze, while the QR-code plates were supposed to be made of stainless steel and thus would not match the sculptures. 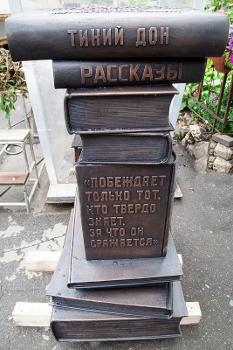 “My task was to use the materials given by Voronezh State University to make works of art that will tell about the achievements of our fellow-citizens, and will appeal to people in Voronezh. This means they are not traditional sculptures, but rather works of art where people can sit and take a photo,” – said Alexey Dikunov.

The Scientists Park is to be opened on 15 September.