Chinese guests at the university

Following the cooperation agreement between Voronezh State University and the Institute of Foreign Languages of Ningxia University (Yinchuan, China) representatives from the Chinese university visited VSU. Among the members of the delegation were: Deputy Director of the Institute of Foreign Languages, Professor Zhao Xiaojia, the Dean of the Faculty of the Russian Language Zhang Haijuan, and a representative of the International Department Lee Hao.

On 10 December, the Chinese colleagues had a meeting with the Rector of VSU Dmitry Endovitsky and discussed the prospects of developing further partnership. The details of the cooperation were also discussed during the meeting with the Dean of the Faculty of Philology, Olga Berdnikova. 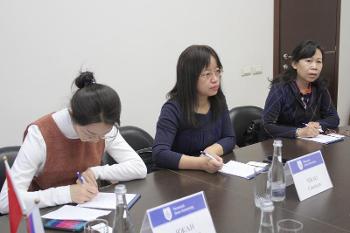 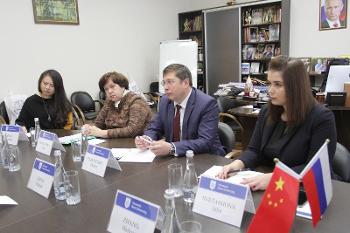 The guests met students of Ningxia University who are studying at the Faculty of Philology and visited some classes. They were also present at the Festival of Russian Fairy-Tale where Chinese students presented their play based on the tales by grandma Kupriyanikha “The grumpy bride”.

The Chinese colleagues praised the potential of Voronezh State University, the interest of students in classes as well as extended extra-curricular work organised by the lecturers of the Faculty of Philology. They also expressed their hope for further cooperation.