Best in Russia, the third in the world: VSU physicist students are prize-winners of the International Tournament of Physicists

Between 21 and 26 April, the International Student Tournament of Physicists was held in the Federal Institute of Technology in Lausanne (Switzerland). 19 strongest teams from 16 countries took part in the event, including the USA, Australia, India, and Sweden.

Russia was represented in the tournament by the team which consisted of: master’s students from the Faculty of Physics of VSU, Yakov Breyev (captain of the team) and Ilia Fedotov, a third year student from the Faculty of Applied Mathematics, Informatics, and Mechanics of VSU, Alexandra Maslakova, a first year student from Voronezh State Technical University, Sergey Glebov, a first year student from Moscow Institute of Physics and Technology, Sergey Melyakov, and a 9th grade pupil from Novovoronezh school № 4, Ekaterina Rosnovskaya. 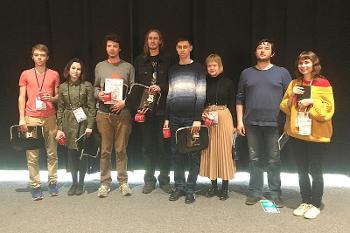 The students were granted the right to represent Russia at the international competition after their victory in the Student Tournament of Physicists, a team competition for students. The participants of the tournament are required to use their knowledge and creativity to solve practical science problems and then justify their decisions and solutions via scientific debate, the Physics Battles. The tournament is held annually and gives students a chance to compete in the quality of their research and their work as opponents and reviewers.

According to the results of the International Tournament, the Russian team reached the semi-finals where it competed with teams from Sweden and France. Our team was second in the group. Another team from France which competed in the other semi-finals had a close win and became the winner of the tournament this year. The Russian team came third. 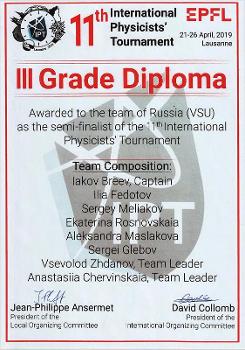 “This year, we had a lot of new members of the team who made our team even stronger. We spent more time learning English and had classes every day. A detailed study of the physical problems also influenced the result,” said the captain of the team, Yakov Breyev.

Nikolai Lysenko, a postgraduate student from the Faculty of Physics of VSU, also took part in the tournament as a member of the organisational committee.

The Russian team was supported by the company “Adeon”, a national developer and manufacturer of DC/DC transformers and power supply systems.