Master’s student from the Faculty of Geography, Geoecology, and Tourism takes part in an environmental education expedition

In April 2018, the Russian Geographical Society held an environmental education camp in the state nature reserve “Belogorie” in the Belgorod region. Among its participants were volunteers from different regions of the Russian Federation. A first year students from the Faculty of Geography, Geoecology, and Tourism of Voronezh State University, Artem Pogorelov, took part in the expedition.

The aim of the expedition was to prepare an area for a future enclosure which will be used to breed lynx. The volunteers’ responsibility was to clean up the area removing dry wood, to handle introduced species (box-elder and American ash), to pick up litter in the cluster “Les na Vorskle” (“Wood on the Vorskla”) with the area of 1,038 hectares. All in all, the volunteers gathered 200 kilograms of scrap metal and glassware, as well as a great amount of plastic waste. So much rubbish was due to the proximity of populated localities situated near the boundaries of the parcel “Les na Vorskle” (“Wood on the Vorskla”) and a lack of a buffer zone. 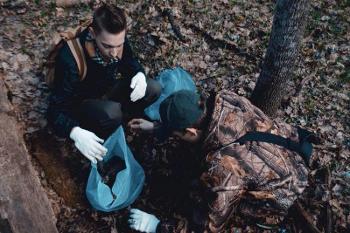 Some of the volunteers form the Russian Geographical Society also counted migratory birds in the nature reserve area “Yamskaya stepi” (“Yamskaya steppe”).  One day, they counted over 6,000 geese species.

The volunteers also helped organise and decorate the exhibition of children's’ paintings and handcrafted souvenirs dedicated to the 95th anniversary of the nature reserve “Belogorie”. The best works chosen as a result of the regional competition were used to decorate the nature museum.

At the weekend, the volunteers went on tours. They visited Velikomikhailovsky museum, Borisov history and local history museum, the diorama museum “The Kursk bulge. Belgorod direction”, the factory “Borisov ceramics”, monasteries of the Borisov district in the Belgorod region, and the nature reserve clusters “Stenki-Izgoria” (“Root of the mountain”) and “Ostrasievy yary” (“Ostrasiev ravines”), where the participants of the expedition could see rare first flowering plants registered in the Red Book of the Russian Federation and the Belgorod region and unique chalk landscapes.