Between 17 and 18 October, the 8th meeting of the German-Russian library dialogue took place at Berlin state library. VSU was represented by Galina Lantsuzskaya, head of the Rare Book Section of VSU library. The meeting was dedicated to the 10th anniversary of the partnership between German and Russian libraries.

The motto of the meeting was “10 years of dialogue: a history of partnership and further prospects”. The key result of the 10-year-partnership is the development of business connections between Russian and German colleagues. They managed to gather information about certain documents and collections previously considered lost, and make them part of the global cultural and scientific heritage. 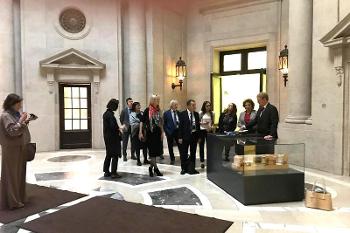 The 8th meeting resulted in signing a partnership agreement between the German National Library in Leipzig and the Russian State Library in Moscow. Their joint project is aimed at the restoration of three unique historic book collections in Leipzig. Another collaboration area is creating online databases of these collections and publication of catalogues. In 2018, VSU’s library participated in publishing the catalogue “Karl August von Hardenberg’s book collection in Russian libraries” including 18 books previously owned by the Hardenbergs and now located in Voronezh.

At the end of the meeting, the participants noted the high level of collaboration between the researchers of the two countries, the importance of safe partnership, and determined further partnership prospects in digital reconstruction of the removed book collections that are of historical, scientific, and cultural importance.

The international library dialogue was established in 2009 by the two leading libraries in Russia and Germany, whose books collections were severely damaged after the WWII or that store collections removed during the war from other libraries. The co-chairs of the dialogue are Barbara Schneider-Kempf, director of the German National Library in Berlin, and Vadim Duda, the director general of the Russian State Library.