On 25 October, the advisor to the President of the Republic of Moldova on inter-ethnic relations, Sergey Mishin, met with the students from the Faculty of Journalism of VSU at the regional House of Journalists. The event was a part of the Moldova Days in the Voronezh Region.

It was also participated in by Alexander Kholod, head of the Department of Social and Political Projects of the Regional Policy Department of the Government of the Voronezh Region, Cristina Bodrug, third secretary at the Embassy of Moldova to the Russian Federation, Ekaterina Ploya, coordinator of the students of the Moldova community in the Voronezh Region, and Roman Khoroshilov, a 1st rank specialist at Voronezh's regional office of the Ministry of Foreign Affairs of the Russian Federation. 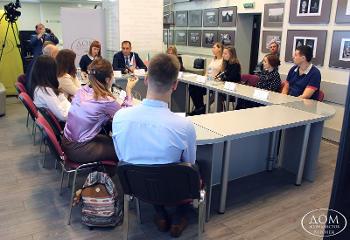 Sergey Mishin gave a lecture on “Political climate in Moldova: general information and specifics of inter-ethnic relations”. He talked about the changes the republic has been undergoing lately, the various ethnicities living in the country, as well as the role of Russian as a language of inter-ethnic communication.