Scientists from the Faculty of Pharmaceutics of VSU are currently working on the problem of targeted drug delivery, one of the latest trends in modern pharmaceutics.

“When we administer medication as usual, the drug is distributed evenly in our body. So, before it actually can have its therapeutic effect on the target organ, the drug also enters to other organs, where its effect may be rather undesirable”, says Yulia Polkovnikova, Associate professor at the Department of Pharmaceutical Chemistry and Pharmaceutical Engineering of the Faculty of Pharmaceutics of VSU. “In addition, the drug reaches its biological target in much smaller concentrations than required, which makes it necessary to increase the dosage by two or three times. 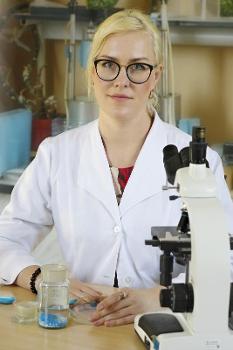 Targeted delivery of medication is not unlike precision bombing, as it helps to avoid undesirable reactions, as well as to lower the dosage and the frequency of administration.”

VSU’s researchers are currently trying to develop a technology for producing capsules that will contain microcapsules with sustained action drugs, which have no analogues on the market at this time. The coating of microcapsules is made of different materials, which ensures the controlled release of the active ingredients. This kind of drug formulation helps to lower the effect of moisture on the stability of the active substance and ensure that the drug enters the lower gastrointestinal tract, where it can be most effectively absorbed by mucosal cells.

The scientific community has been focusing on the problem of increasing the therapeutic effectiveness and safety of medication for a long time. The value of the project conducted by Voronezh scientists was pointed out by the head of the Department of Pharmaceutics of Tashkent Pharmaceutical Institute, DSc in Pharmaceutics, Professor Yokut Karieva:

“The solution to the problem is intertwined with the development of medication with a modified mechanism of release of active ingredients. This is, in the first place, targeted-release medication with a prolonged effect, and such medication includes microcapsules. Today, capsules and microcapsules are quite common types of dosage formulations. Using microcapsules as drug carriers helps to prolong the effect, increase the stability of active ingredients, and reduce the number of side effects significantly. This is why, for the last 10 years, a tendency has been observed towards producing modified-release dosage formulations.”