Between 3 and 6 February, Artem Larchenko, a third year student from the Faculty of Geology of Voronezh State University, took part in the 3rd international geological and geophysical conference “GeoEurasia–2020”. The event included round table discussions, public exhibitions and lectures, presentations by corporate exhibitors, a case marathon, etc. 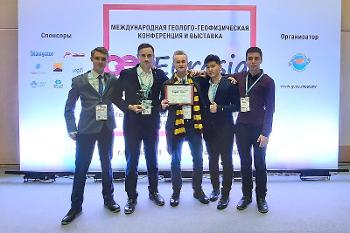 The winner of the marathon was the team “Snarky geologist” whose captain was Artem Larchenko:

“All we had to do to take part in the marathon was to form a team and submit an application. The other members of the “Snarky geologist” team were: Areseny Kulikov, a second year student from Gubkin Russian State University of Oil and Gas, Andrey Kazakov, a third year student from the same university, Omari Shaikhaliev, a second year student from Peoples' Friendship University of Russia, and Vyacheslav Kim, a fourth year student from Tomsk Polytechnic University. During the qualifying stage we had to solve five cases. They were prepared by representatives of universities and employees from the largest companies in the industry. We had a week or two to solve a case. Each case consisted of five practical tasks. For example, one of the tasks was to study and analyse various aspects of the conception “digital oilfield”, and to evaluate its economic benefits and possible risks. Another task was to model an oilfield, in other words we had to build its geology from scratch, without using earlier created frameworks. We could only rely on our knowledge of similar oilfields and the provided data. We solved both of the cases and the organisers invited us to take part in the final in Moscow. It was a fierce competition: only siх teams out of twenty reached the final. The last activity was a codebreaker quiz which revealed the winner. Thanks to this conference I learnt a lot of new things, met a lot of new people, and discovered new professional opportunities. I would like to thank Viktor Nenakhov, the Dean of the Faculty of Geology, and Galina Zootariova, the Deputy Dean, for organising this trip, my team mates, and Elena Larchenko, my Mum, for giving me a lot of support.” 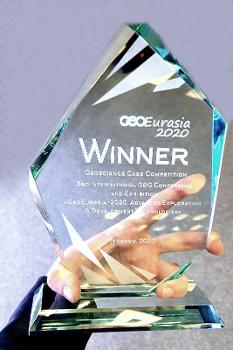 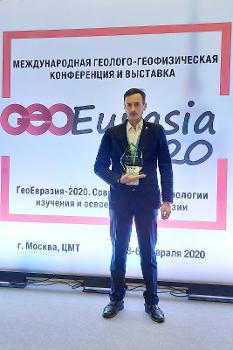 The international geological and geophysical conference “GeoEurasia–2020” and the exhibition “Contemporary technologies of studying and exploiting mineral resources of Eurasia” help inform professional geologists and geophysicist about innovative projects, new studies in the area of methodology, processing, and interpretation of geophysical observations”. This year, the number of its participants exceeded a thousand people. They included representatives of organisations exploiting mineral resources, service companies offering services in the area of geological and geophysical research, manufacturers of specialised equipment, specialists from federal and regional governmental authorities, and businessmen. The events took place in the Centre for International Trade on the Krasnoplresnenskaya quay in Moscow. It was organised by OOO GeoEvrasia with the support of the interregional non-governmental organisation “Eurasian geophysical society”.