On 19 March, Vladimir Gusakov and Sergey Churikov, Associate Professors at the Faculty of Philology, gave a joint lecture on Russian and Georgian cultural relations. The event took place in the “Amital” bookstore as part of the project called “A Large University for a Large City”. The title of their talk was borrowed from a poem by Georgian poet Titsian Tabidze dedicated to two great representatives of the Georgian and Russian nations, Pushkin and Rustaveli: “Two genius will be joined in a powerful fusion”. 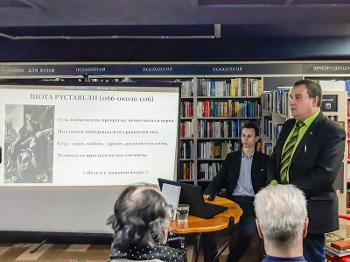 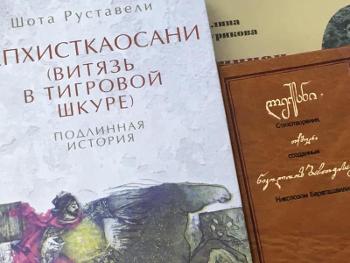 Sergey Churikov talked about the peculiarities of the Georgian language: the peculiar Georgian writing, the system of cases, and the absence of grammatical gender. The audience learnt that despite their differences, Russian and Georgian have a lot in common.

Vladimir Gusakov spoke about the golden age of Georgian poetry, the period of rule of Tsarina Tamara and Shota Rustaveli’s poem “The Knight in the Panther's Skin”. Then, the lecturer described centuries of tragic history when Georgian land suffered from foreign invaders. He reminded about the challenging but salvational decision of Tsar Heraclius II to annex Georgia to Russia. This event is described in the poem “Fate of Georgia” by Nikoloz Baratashvili. According to Vladimir Gusakov, in the 20th century the two cultures and nations were at the closest thanks to Niko Pirosmani’s paintings, translations of Konstantin Balmont, Nikolai Zabolotsky, and Boris Pasternak, Georgian cinematography, and the works of Chabua Amirejibi.

At the end of the lecture, the scientists expressed their hope that the interpenetration of the two cultures will help to overcome the opposition between the two countries in the post-Soviet period.