On 19 September, the results of the joint project between the Goethe-Institut and the education portal COLTA.RU “The Earth Is Flat – How to Read Media?” were announced at the Voznesensky Centre. Among the participants of the event were Alla Shesterina, a Professor from the Department of Journalism of Voronezh State University, and Anna Litovskaya, a postgraduate student from the Faculty of Journalism of Voronezh State University. This large-scale two-year project conducted with the support of the European Union, has brought together the efforts of researchers, lecturers, and media environment practising specialists aimed at promoting media literacy. The project included workshops and discussions of video lectures. The organisers also prepared video series, comics, and study materials which can be used by teachers in the area of media education. A number of events were held at Voronezh State University. 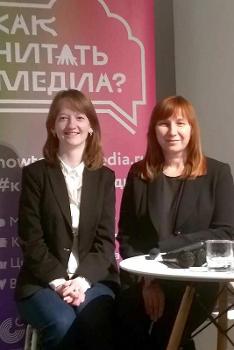 “The issues of developing meaningful interaction with media environment is one of the key issues for humanity. It was a fair point made by the organisers that we are citizens of the digital world. Therefore, we have to be aware of, understand, and develop safe and efficient behavioural patterns. The project “The Earth Is Flat – How to Read Media?” helped us develop and apply techniques aimed at promoting media literacy among different segments of population. The final event allowed us to see what significant results in solving global issues can be achieved by the united efforts of specialists from various countries. We contributed to the project by creating a series of videos “Media reality”, which can be used in educational disciplines at different levels. What’s more, our university hosted the discussion of the video lecture “New media” by Lev Manovich. And I think it is just a beginning. Because the key effect of the project is that it is a start point for the development of media education practices for many of its participants,” said Alla Shesterina.