Graduates of the School of Inter-Ethnic Journalism 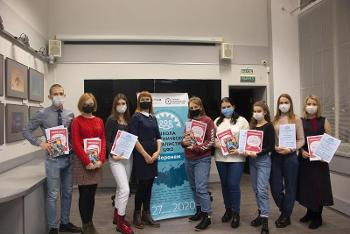 The programme was held at the Faculty of Journalism of Voronezh State University and lasted for two months. When the university switched to distance learning, the school also continued its lessons online. Before that, the students had had a chance to visit the Ethnographic Museum of VSU, Voronezh synagogue, and go on a tour “Multinational Voronezh”. During the programme, they wrote about 50 works which were published at the regional page of the school on the website “National accent” and in “Obozrevatel.vrn”. The certificates were awarded on 26 November in the regional House of Journalists.

The School Inter-Ethnic Journalism is a project by the Guild of Inter-Ethnic Journalism which has been held in Russia for the sixth time. At the Faculty of Journalism of VSU it has been held for the fourth time. In 2020, the school was organised in cooperation with the Federal Agency for Nationality Affairs in 27 Russian cities: Arkhangelsk, Barnaul, Cheboksary, Cherkessk, Elista, Izhevsk, Irkutsk, Khabarovsk, Khanty-Mansyisk, Krasnoyarsk, Lipetsk, Makhachkala, Moscow, Orenburg, Pskov, Rostov-on-Don, Salekhard, Saint-Petersburg, Saransk, Syktyvkar, Tomsk, Ulan-Ude, Vladikavkaz, Volgograd, Voronezh, Yakutsk, and Yekaterinburg. The Public Chamber of the Russian Federation provides support to the School of Inter-Ethnic Journalism.