On 9 January, the 7th season of A Large University for a Large City project started. Mariana Rozenfeld, an Associate Professor from the Department of General Linguistics and Stylistics of the Faculty of Philology of Voronezh State University, gave a lecture in the “Amital” bookshop in Pushkinskaya street. 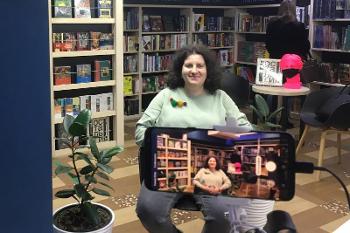 The talk was dedicated to the national specifics of business communication.

“Despite globalisation, we are still very different. That is why you can experience a cultural shock unless you know the national specifics of communication within a particular culture. A journalist, Vsevolod Ovchinnikov, described a situation when an American asked a Japanese colleague to drop in his materials on the way to a publishing house. The Japanese colleague said nothing, however, he was so confused that instead of using a lift, he climbed down the stairs to deliver the papers. Later, Japanese colleagues asked the American guy why he had been so disrespectful. How could he ask the father of a family and a high-profile staff member to serve as a mere courier?” said Mariana Rozenfeld.

The linguist touched on the topic of stereotypes about different nationalities. For example, it is commonly believed that Germans are punctual, Americans are business-like, the Japanese are polite, the French are courteous and have a good sense of humour, and the British like traditions. There are different classifications of business cultures and mentalities that manifest themselves in texts by people of different nationalities. There is also the West – East dichotomy: eastern people view themselves as a part of the world, and the people from west see themselves as the transformers of the nature and believe that their existence is independent from it. There is another criterion which can be used to classify cultures, i.e. their attitudes towards time. Western peoples see themselves as being part of a continuity: they are immersed in time. For representatives of the western world, time is discrete: they are punctual and tend to plan. This concept includes the criterion which characterises the way texts and works of art are created. In the west, they prefer texts with a linear and logical structure, whereas the texts in the east tend to have a concentric structure. The scientist concluded that there are no more developed or less developed business cultures, you have to know the peculiarities of the people you work with and take them into account.

The lecture was organised by the Department of Pre-university Education of VSU. The VKontakte broadcast of the event has been viewed by over 6 thousand people.