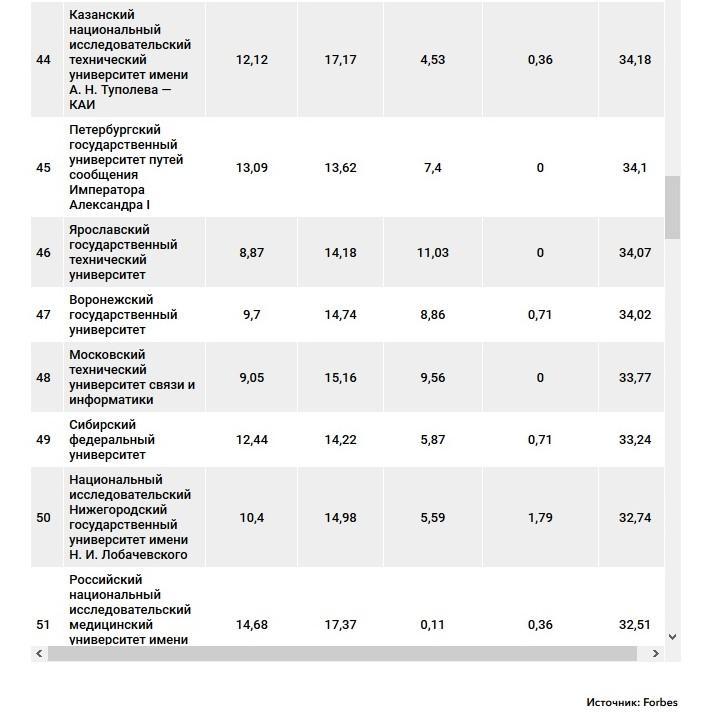 The “Education Quality” index (based on the data provided by the Ministry of Education, maximum 30 points) includes two parameters: the quality of teaching and international activities. This year it also included a new parameter – the number of young lecturers (up to 40 years old).

“Networking Quality” (maximum 30 points) evaluates the general level of university entrants and the chances of building useful networks while studying. The index includes two parameters: the average state exam grade of the students, and the Forbes factor.

The “Employers' Demand for Graduates” (30 points) is based on the results of the survey of the top 100 companies in Russia.

Same as the previous year, the top university in the ranking was the Higher School of Economics. Moscow State University was the second best, and Moscow Engineering Physics Institute was the third. The top 20 universities also include two private universities: Innopolis University and the New Economic School. Compared to the previous year, the number of universities in the ranking has decreased from 1264 to 1218, largely due to a smaller number of private education institutions.

“Russian universities are participating in a large variety of rankings including the traditional ones such as QS, Times, and Shanghai Ranking, and others. At present, the Moscow International University Ranking entitled “The Three University Missions” is gaining popularity. Out of all these rankings, the Forbes ranking is quite unusual and interesting. I think that 47th position of our university is a success. This year the ranking used a new parameter, the number of young lecturers (up to 40 years old). This is why our position in the ranking deteriorated compared to the last year, from 31th to 47th. However, it is an incentive to engage with younger academic staff and increase their number,” said VSU Rector Dmitry Endovitsky.

The other Voronezh university included in the top 100 of the ranking is Voronezh State Medical University named after N.N. Burdenko (97th position).