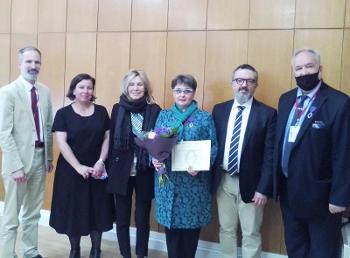 The original Palmes académiques was instituted by Napoleon in 1808 to decorate university teachers and people associated with education for their valuable service in the field of education and enlightenment. The order is conferred on French citizens for a great contribution to the development of the national language and culture. In rare cases, it is conferred to foreign scientists and teachers whose research and professional activities are related to France, the French language and culture, and their promotion in other countries. Today, Palmes académiques is the most prestigious award in Europe for services to higher education, and the oldest state award in France.

Elena Alexeeva received the award during an official award ceremony at the French Embassy in Moscow. She was decorated for her contribution to the promotion of the French language and culture abroad, raising awareness of higher education in France, and strengthening scientific and academic partnership between Russia and France.

Elena Alexeeva has been working on the partnership between VSU and French universities for a long time. She takes part in the development of double degree programmes, promotes French-Russian partnership within the Erasmus+ programme, and develops academic and cultural relations between Russian and French organisations.