Voronezh scientists talk about their joint research in restorative dentistry

VSU physicists together with their colleagues from Burdenko Voronezh State Medical University continue their research in restorative dentistry. They developed a unique technology which minimises the risk of recurrent caries. We spoke with Pavel Seredin, Yuriy Ippolitov, and Dmitry Goloschapov about the technology. 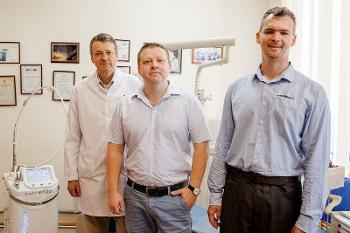 “How does restorative dentistry work today?” starts Pavel Seredin, Head of the Department of Solid State Physics and Nanostructures. “First the doctor removes damaged tissues and forms a cavity for the dental filling. A dental filling is a composite of copolymers which harden under UV light. To fix the filling, dentists use so-called bonding systems and adhesives. The tooth cavity is treated with acids which “etch” the enamel and the dentine and thus allowing adhesive components to get inside and serve as a bonding agent. But a tooth is a living system. Inside the dentine there are microscopic channels with dental fluid. When you remove damaged tissue to replace it with the dental filling, there is a chance of microleakage which can dissolve the layer adjacent to the dental filling. As a result we can see cracks, chipped teeth, and recurrent caries, our loyal friend,” jokes Pavel Seredin. 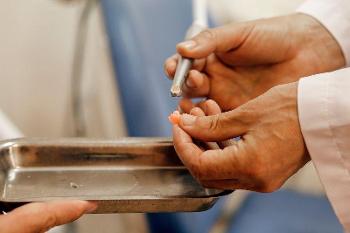 “Therefore, to improve the quality of restoration and enhance the adhesion, we need a material which is chemically, structurally, and morphologically identical to the tissue being restored. The thing is, its is impossible to create artificial enamel or dentine. Up to now, nobody has managed to reproduce their complex morphology.

Since we can’t do anything about the restoration material, the solution is to develop an intermediate layer which will bond the natural tissues to the dental material. If the adhesion, i.e. the bond between the material and the dentine is strong, the risk of recurrent caries is minimal”.

Eleven years ago, Yuriy Ippolitov, Head of the Department of Pediatric Dentistry and Orthodontology of VSMU, was working on his doctoral thesis. Such medical research requires a lot of data which can be provided by exact sciences (physics, chemistry, etc.). At that moment, a group of researchers headed by Pavel Seredin went to a research centre in the USA. Through mutual acquaintances, Yuriy Ippolitov suggested Pavel Seredin to perform IR spectroscopy of teeth to study both damaged and healthy tissues.

“Since I used this method in my work, I decided to give it a try. We spent two months in the USA and got our first results there. They were interesting, so I joined the project,” said Pavel Seredin.

Parallel to this, a senior researcher at the Department of Solid State Physics and Nanostructures of VSU Dmitry Goloschapov was working on his PhD. He was studying hydroxyapatite, the main mineral of which dental enamel, dentin, and human bones are composed. Dmitry was working on a technology for obtaining hydroxyapatite from eggshells, a biogenic source of calcium.

“We then supposed (and were proven to be right) that endogenous calcium is similar to calcium in the human body. The fascinating thing was that Dmitry developed and elaborated the technology for obtaining nanoscale hydroxyapatite whose form, morphology, and composition was as close as possible to those of the apatite in our bone and dental tissues,” said Pavel Seredin.

As a results, a research team was formed which is still working on the problem. Besides the dental materials, VSU and VSMU researchers have been studying mixed saliva, dentinal fluid, and the development of caries and ways to predict them.

“The study described in our recent article began in 2013. Back then we studied the effect of each component on the whole compound and determined the optimal concentrations and activation mechanisms, then tested them. Each stage takes time. Together with Yuriy Ippolitov we conducted experiments (often in the clinical setting) trying to test various modes, stages, and conditions compared to the existing methods. When we saw that our improvements gave certain results, we decided to investigate how these mechanisms actually work. The problem is, they are activated on a molecular level and are very hard to study. Using the MegaScience facilities (large expensive international research facilities), namely Australian equipment, we could perform our studies on a submicron level and thus determine the interaction of basic blocks. When you get the result, your task is to understand it and to suggest what kind of experiment to conduct next. Science takes a lot of time,” says Pavel Seredin.

“Let’s also talk about our experiments with chipped teeth,” suggested Dmitry Goloschapov. “When the buffer layer between the adhesive and the tooth is not good enough, the tooth is usually chipped along the surface between the enamel and the dental filling. Our technology allows for such tight adhesion that the filling is more likely to crack in two rather then to get chipped under strong mechanical influence.”

The researchers obtained the first results back in 2010.

“The problem is we only can find the best equipment abroad. Thus, since 2015 we’ve been collaborating with our colleagues from Australia. Our joint research is supported by the Russian Science Foundation. We have already published some of the results in highly ranked international journals.

But there is always more and more work to do. We are always in search of something new. When you go to a foreign research centre, you try to get the most out of it. The synchrotron in Australia is a large research facility which works every day of the year, 24 hours a day. Megascience facilities give us high-precision data thus ensuring the quality of the research. However, it is very difficult to get access to such facilities. It costs 150 thousand AUD (over 8 million roubles) to work with the synchrotron for five days. To get access to the equipment, we take part in a competition. We present our project and an international jury assesses it based on certain criteria,” said Pavel Seredin.

“Our alliance of physics and medicine is very effective for one reason: the medical community knows little about the possibilities opened up by physics, while physicists have specific knowledge, but can’t use it in medicine,” said Yuriy Ippolitov. “First we tried to increase the tropism (adhesion to certain systems, tissues, or cells) between the dental filling and the tooth. We didn’t have to start from scratch here. In 2010, we registered a patent for a bio primer with dentine compounds. Having worked on the problem for 10 years, we saw that we needed to elaborate the system. We are not happy about the way dental cavities are treated at the moment. This is why we are changing the rules of tooth filling and the conditions for the process. Another problem is that when you work with hard dental tissues, you are likely to fill infected dentine channels as well. This is why we suggest a new approach to tooth preparation: instead of dental devices we suggest using high-intensity laser radiation. It removes caries and sterilise the cavity with minimal effect on the tooth tissues in the adjacent areas.”

“To date we have achieved a tooth filling with an increased effective lifespan,” concluded Yuriy Ippolitov. “Of course, it does not solve all the problems, but it minimises the risks. Either medicine or physics alone could not solve this problem. I believe that our 10-year partnership is a fruitful one”.