Daria Galtsova, a postgraduate student from the Faculty of Philology of VSU, participated in a competition for a grant for research and project initiatives of young people in liberal arts named after academician V.G. Kostomarov. The competition was held for the first time and was organised by the Pushkin State Russian Language Institute and the Ministry of Science and Higher Education of the Russian Federation. 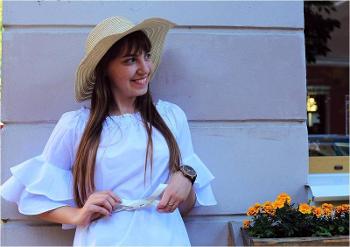 On 7 September, after the experts voted, 30 semi-finalists were chosen who presented their projects online to the members of the competition committee from 13 to 16 September. One of the most important criteria was the “Orientation of the project towards the support of the Russian language in CIS countries” since cultural cooperation between the CIS countries had been named a top priority.

The ten winners of the competition, who won a 50 thousand roubles grant each, were announced after the online presentations. Soon they will sign agreements with the institute, receive their grants, and implement their projects before 30 November. In December, all the winners will meet in Moscow and present the results of their work.

“I’ve been studying dialectology at the Department of Slavic Philology since the first year of my bachelor’s programme under the supervision of Professor Velmira Dyakova. I got really involved in this area: I studied the dialects of my native villages, I went on dialectological expeditions to other regions, and I also participated in the work on the third edition of the “Dictionary of Voronezh dialects”. The older I got, the more I thought about how to teach such a difficult subject as dialectology. To study it well, one needs to get a good understanding of the system of the national language and historical linguistic processes. It is obvious that international students don’t have this knowledge. How to help international students to understand the national mentality through dialectic vocabulary because they need it in order to immerse themselves into a new culture? This is how the idea for my project was born. It is called “Let’s yabber, or on the question of the study of dialectic vocabulary by philology students from CIS countries”. The project will be implemented at the Faculty of Philology of VSU, so the methodology was aimed at the students from Turkmenistan who are now studying at the Faculty of Philology. Before that, there were no projects in the region that are intended for additional work with students from Turkmenistan dedicated to certain aspects of a subject. The results of the project can be presented in three blocks of classes focused on dialectic vocabulary and the problem of its use,” said Daria Galtsova.