On 29 September, the Ministry of Science and Higher Education announced the results of the competition for grants in the form of subsidies from the federal budget for the implementation of individual activities within the federal science and technology programme for the development of synchrotron and neutron studies and research infrastructure for 2019–2027. VSU's research project “Distributed infrastructure of high-precision diagnostic methods in the ultrasoft X-ray region of synchrotron radiation for functional materials and nanoscale structures, including bio, nano, and hybrid ones, for promising technologies and technical systems: from educational technologies through fundamental research to practical application” became one of the winners and received 305 million roubles of state funding for 2021–2023. VSU's project participated in the competition in section No. 2: “Methods of synchrotron and neutron diagnostics of materials and nanoscale structures for promising technologies and technical systems, including a fundamentally new nature-like components base” and was chosen as one of the three winners out of fifteen applications for this section.

The final step of the project's defence was held on 23 September in the Situation Centre, a coordination centre of the Russian Federation Government, in the form of a video conference at the session of the Board for the Implementation of Programmes. According to the regulations, the project was presented by its head researcher Sergey Turishchev, DSc in Physics and Mathematics, Associate Professor, Acting Head of the Department of General Physics of the Faculty of Physics. 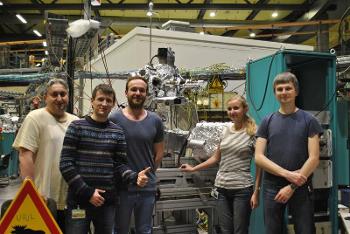 This project is a recognition of the high level of scientific schools of Voronezh State University and of the training of young specialists at the Faculty of Physics. The project involves not only a close collaboration between the scientific schools of the Faculty of Physics but also the interfaculty cooperation with creative groups of the Faculty of Chemistry and the Faculty of Biomedical Sciences. It took a long time to prepare the application, to discuss, approve, and defend it, and now this step is over. The group of the project executors worked closely with Professor Evelina Domashevskaya, Honoured Scientist of the Russian Federation and Head of the Scientific School.

Professor Oleg Ovchinnikov, Dean of the Faculty of Physics, noted that the implementation of the project will allow the university’s research to be considerably improved in relation to unique equipment available at the global level.

“We achieved success in this difficult competition due to the constant attention and support of VSU Rector Dmitry Endovitsky and all the university's administration,” said Sergey Turishchev.

The research team has started to work on the project.