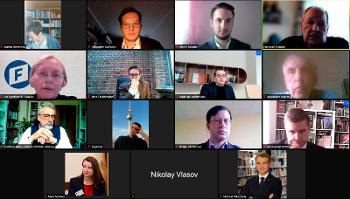 Among the participants of the discussion were representatives from Moscow State Institute of International Relations, the Friedrich Ebert Foundation Russia, the Moscow office of the Friedrich Naumann Foundation, the Centre for German Studies of the Institute of Europe of the Russian Academy of Sciences, and research centres at universities in Moscow and Saint Petersburg. The discussion covered issues relating to the elections in Germany, the prospects of shaping up the governing coalition, and the peculiarities of the bargaining power of opposing parties. A special emphasis was made on the development of Russian and German relations depending on the political scenarios in Germany. The discussion also included a presentation of the analytical work by a team from the Centre of European Studies of the Institute of International Studies at Moscow State Institute of International Relations “Elections in Germany 2021: A Guide”.