A lecturer from the Faculty of Journalism and a traveller, Roman Shklovsky, is the winner of a LitRes book contest

Roman Shklovsky, the Director of the Educational Television Laboratory at the Faculty of Journalism, became the winner of the book contest “Trip around the WORD”. The contest was held online by LitRes. 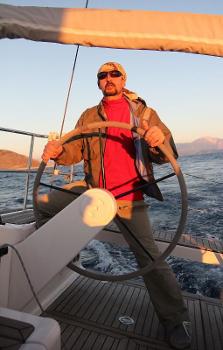 To take part in the event, one had to publish a book in LitRes. Roman Shklovsky became the winner in the nomination “Traveller’s notes”. In this nomination, the jury was headed by Anton Zorkin, the editor of the “National Geographic Russia”. Overall, 278 stories were submitted for the contest. One of the prizes for the winner is free promotion and distribution of their book by LitRes. The book will also be voiced by a professional reader to make an audiobook. The electronic book can be bought in the online stores LitRes, Ridero, and Ozon. 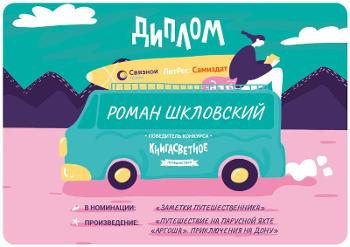 In the first part of Roman Shklovsky’s book, the reader will join the author and his friend on a voyage along the Don River on a 5-meter self-made yacht called Argosha: cave monasteries, sunrises and sunsets, fishing, and the “aroma of an leisurely sailing trip”. The second part is an original guide on the route the author covered between Voronezh and Pavlovsk. The book provides accurate geographical coordinates of all stops, staging posts, overnight stops, descriptions of the banks, and the peculiarities of a boat ride.

“My first boat was a birthday present from my wife and son,” wrote Roman Shklovsky. “That was an Omega-2 inflatable rubber boat. It is now nearly 20 years old but it is still usable. Later, I had an Ondatra inflatable fishing catamaran, a Kolchim superlight kayak, and inflatable boats produced by the company Volny veter: a single-seated baidarka and a Valdai-2 sail assisted rafting catamaran, which was my first sailing boat. I made a rigid deck for this catamaran, allocated room for a tent, changed all bilge boards with a reliable wooden centreboard and also slightly changed the rig. On this catamaran, I’ve been to Onega, Ladoga, the rivers of the Central Black Earth Region, and the Azov Sea. However, despite all the advantages of my inflatable sailing boat, one day I felt like making a small yacht on my own”.

Roman Shklovsky is a director, traveller, photographer, travel journalist, and a lecturer at the Department of Journalism of Voronezh State University. He has worked as a photojournalist, director, and TV and documentary film editor. He is most well-known for his documentary series “On the river alone” created on commission from the TV company “Pervy TVCh”. The episodes of the programme are broadcast on the TV channel “Okhotnik i rybolov” (Hunter and fisherman) and online.