On 21 October, VSU Rector Dmitry Endovitsky and Dmitry Zhukalin, Head of the Department of Science, Innovation, and Information Policy, took part in a regional stage of the project “OK!NANO-tour” aimed at the development of the qualification assessment system in the nanoindustry. The online conference was dedicated to important issues of human resources at technology-intensive regional production facilities and the advantages of using a system of independent qualifications assessment for graduates, specialists, and employers of the Voronezh Region. 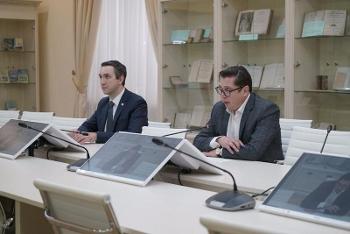 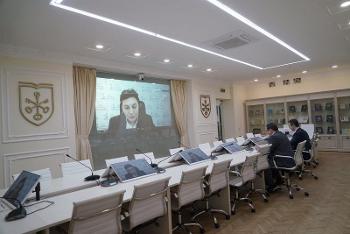 Among speaker were representatives of the municipal and regional administration, heads of innovative businesses and business structures that work in the area of the nanoindustry and technology-intensive industries of the region and educational organisations.

Representatives of key institutions involved in the development of scientific, technological, and economic potential of the Voronezh Region, signed a cooperation agreement with the Council for Professional Qualifications in the Nanoindustry. The parties will develop a national qualifications system and introduce an independent qualifications assessment in order to contribute to creating a new HR management infrastructure for innovative businesses of the Voronezh Region. The agreement was signed by Dmitry Endovitsky, Rector of Voronezh State University, Viktor Popov, CEO of the Union of Manufacturers and Entrepreneurs of the Voronezh Region, Olga Krukova, CEO of NP MON, Pavel Kutsko, CEO of AO NIIET, and Dmitry Proskurin, acting Rector of Voronezh State Technical University.

“It is impossible to train specialists for such crucial industries in Russia as micro and nanoelectronics without extensive research. It is closely connected with the education programme aimed at training specialists for the nanoindustry,” said Dmitry Endovitsky.

Viktor Popov expressed his confidence that the expertise of specialists from the Council for Professional Qualifications in the Nanoindustry and professionals will be useful for all parties involved in the development of the national qualifications system in the region.

During a pitch session, reports were made about experiences and achievements in the area of development of independent qualifications assessment in the region and about the opportunities the national qualifications system offers for the development of the human resource capacity in technology-intensive sectors.

Dmitry Zhukalin, Head of the Department of Science, Innovation, and Information Policy and Head of the examination centre of AO NIIME, discussed in his report interaction between the system of higher education and the system of independent qualifications assessment.

“What is happening now in Russia in terms of the development of the national qualifications system can be called changing from a conservative approach which created a gap between university education and production. Today, the interactions between the university and the employer need to be systematic and be carried out at various levels. This collaboration should involve both creating joint laboratories, education programmes, and conducting various tests with the help of various tools of independent qualifications assessment. Independent qualification assessments provide the easiest and the shortest way to construct a student’s path from studying at university to a job in real production. Future specialists would like to understand their employment prospects when they enter university. That is why they choose those educational institutions in which these prospects can be tracked down.”