On 25 November, the VI International Scientific Conference “MEDIAEducation: media involvement VS media isolation” was held at the Faculty of Journalism of the Chelyabinsk State University. The representatives of the Faculty of Journalism of VSU, Dean Vladimir Tulupov, Professor Alla Shesterina, postgraduate and master’s students participated in the conference. This year the conference was held both online and offline. Among the participants were 222 researchers from 38 cities of Russia, as well as from Sweden, Italy, Poland, Belarus, and Latvia. 130 reports were presented at two plenary and nine panel meetings. 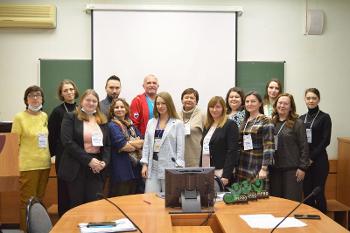 “The conference has been conducted for several years now and it always offers a high level of discussion of the most pressing problems. This year I had the privilege of opening the plenary meeting of the offline conference day and to supervise one of its sections, and also to participate in the IX Media Education Forum “ImPRO” as an expert. In the form of a public talk we discussed the issues of adapting to new life conditions driven by the media reality. It’s not surprising that such words as media reality, media culture, media ecology, and media hygiene could often be heard at the conference and the forum. The role of media in our life is becoming more significant and this trend will only continue developing in the nearest future. We must learn to benefit from the media practices that we are forced to use today due to various reasons. It's great that young researchers of our university participated in the conference as they are the ones who will live in the world that we are developing now,” said Alla Shesterina.