Babadjan Achylov and Arslan Shovketov (Turkmenistan), international third year students from the Faculty of Philology of VSU, won the international contest of essays in Russian “Power of Thought is Power of Word” held among international students in Russia and abroad. Babadjan Achylov wrote an essay on the topic “How can the Russian language help me in my career?” and the theme of Arslan Shovketov’s essay was “Why do we need to study foreign languages?” The contest was held in November at Pyatigorsk State University (with the support of the Ministry of Education) in the framework of the project “Russian language conquers the world”. 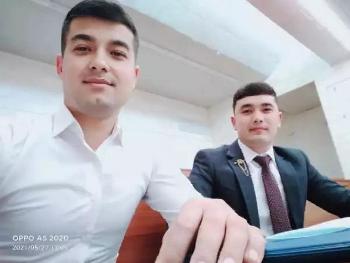 What is the power of language and words? What benefits does the knowledge of a foreign language offer? Why do many people learn Russian in the modern world? These and other issues relating to Russian and foreign languages were discussed by the contestants. Among the participants of the educational event were schoolchildren, students from educational centres, and international students from universities of Russia, neighbouring countries, and beyond. 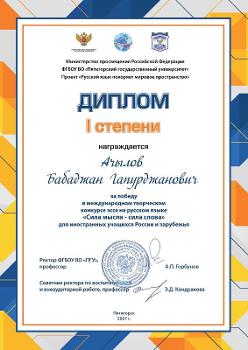 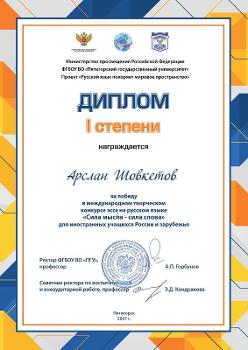 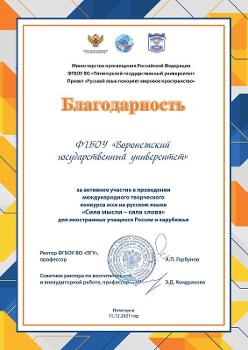 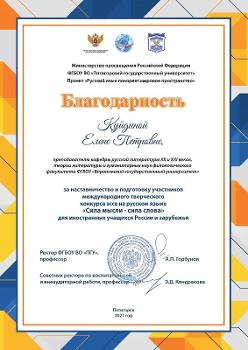 The results of the contest were concluded in December. The organisers of the event expressed their gratitude to Voronezh State University for an active participation in the organisation of the contest. They also awarded Elena Kuidina, a lecturer at the Department of Russian Literature of XX–XXI Centuries, Theory of Literature, and Humanities at the Faculty of Philology of Voronezh State University, with a letter of acknowledgement for supervision and training of the participants of the contest.