Graduates of the Faculty of Computer Sciences and the Faculty of Applied Mathematics, Informatics, and Mechanics: “It’s easy to start a career in IT”

The IT sphere in Russia is undergoing dramatic changes. A large number of companies have left the market since the beginning of the year, and the focus has shifted to import substitution and the development of Russian software. What effect did it have on the employment and career prospects of VSU students and graduates? We asked students and graduates of the Faculty of Computer Sciences and the Faculty of Applied Mathematics, Informatics, and Mechanics to answer this question. 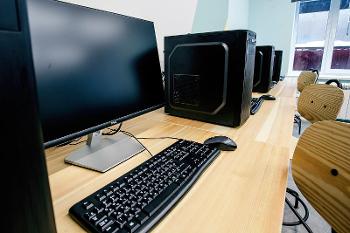 The fact that a large number of IT companies have left Russia had a great effect on the labour market. Senior lecturer at the Department of Digital Technologies of the Faculty of Computer Sciences Aleksey Maksimov believes that the issue primarily relates to experienced developers. As a result, the companies decided to relocate their most valuable employees. However, most of the specialists that stayed at home continue developing software in Russia.

“As far as I know, there are just a few international companies which no longer hire Russian employees. The others either allow their employees to work from home, or relocate them overseas,” said Alexander Derkanosov, graduate of the Faculty of Computer Sciences. “I know this from my personal experience. A friend of mine works for an American company from home, here in Voronezh. Another one, who works for a German company, was relocated to Greece.

Alexander Derkanosov works for Antilatency, a company which develops software and hardware for VR/AR, drones, and robotics. Antilatency relocated its employees to Cyprus, where it has recently opened a new office. Alexander stayed at the Voronezh office, but he says that he misses his colleagues who went to Cyprus.

Another problem is that software developers can’t work for international companies due to new payment conditions. As a result, a lot of them started looking for a job in Russia. Stanislav Tkachuk, a student from the Faculty of Applied Mathematics, Informatics, and Mechanics, is one of such specialists. He used to work for an American company and he was paid in US dollars. He has now encountered certain difficulties.

“The dollar to rouble rate has changed a lot recently, banks do not perform SWIFT transfers and charge unreasonably large commission fees. So my salary became a lot smaller and the schedule is very unstable, which is why I decided to seek a job here, in Russia. Now I work as a web-developer in Voronezh, for a company called Safib. The salary is not so good, but I don’t have much choice. Unfortunately, the payment rates within the country have not changed.”

Despite all the changes in the working conditions and interaction with international partners, it is still quite easy to find a job in the IT sphere. Some VSU graduates say that there are fewer vacancies now, but the change is not fatal. There are fewer jobs, than there used to be, but IT specialists are still in very high demand.

“My friends and colleagues can easily find a job now”, said Denis Vlasov, graduate of the Faculty of Applied Mathematics, Informatics, and Mechanics. “As for me, I wasn't affected by the changes in any way. I still work for a software development company called CorePartners. I didn’t have to seek for a new job myself, but I’m sure, there would be no problems.”

“I don’t think IT graduates will have any problems finding a job in the nearest future,” said Alexander Derkanosov. “On the contrary, IT specialists working in Russian companies are now moving abroad, which means these companies have to find new employees, and they might as well consider recent graduates. I won't say what the situation will be like in five years, but today there are a lot of career opportunities in the sphere of IT.”

Students from the Faculty of Computer Sciences and the Faculty of Applied Mathematics, Informatics, and Mechanics can always find jobs thanks to the university’s partners. Working for these companies, students and graduates can easily integrate within the industry in just a couple of months. Some of the university’s partners, such as DataArt, which regularly employed VSU students as interns, have now closed their offices in Russia. Therefore, the university’s faculties have to look for new partners. They will most likely be Russian companies.

“The current situation has led to an increase in the demand for Russian developers,” said Aleksey Maksimov, a leading specialist and a senior lecturer at the Department of Digital Technologies of the Faculty of Computer Science of VSU. “At the moment, new companies are springing up and the existing ones are growing, and they all come to universities in search for employees.”

Despite all the changes occurring in the sphere of information technologies, it still remains highly popular. New solutions are required for various spheres of our life, including economy and industry, and IT can provide such solutions. The introduction of machine learning and artificial intelligence in the production process provides a wide range of opportunities. And it up to the IT specialists, including future specialists, to develop and elaborate those processes.

“Even the current crisis can have positive outcomes. I think people in Russia will now pay more attention to the software developed in their own country”, said Aleksey Maksimov. “Even now we already have great systems based on our own software and our own cores. It is likely that now we will be able to make our IT environment more secure, stable, and transparent.”

To provide more career prospects for its students, VSU organises special events. In spring, a lot of faculties, including the Faculty of Computer Sciences and the Faculty of Applied Mathematics, Informatics, and Mechanics, hold Career Days. During the event, students have an opportunity to learn more about the industry and the IT companies operating in Voronezh. Such events help students to plan their career paths and decide which companies they would be interested in working for.