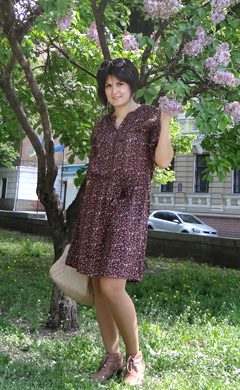 I studied at the Faculty of Applied Mathematics, Informatics and Mechanics, first as a bachelor, then as a master, then as a postgraduate, and now I am teaching at this faculty.

I joined the club in 2015 and I have been helping foreign trainees to adapt to our city for more than four years by now. Then, back in 2015, my students invited me to the Buddy Club event “Language tandem”, I really liked the event itself and the eager eyes of the club's volunteers, so I decided to become one of them. I am happy to communicate with students not only in Math classes, but also in such a friendly environment.

Despite mathematics, I have always been interested in foreign languages. I studied English at school and decided to study Spanish, just for pleasure, at university (while studying at the AMM Faculty!). While communicating with the foreign students in Buddy Club, I can improve my previously acquired skills and “help” with learning Russian.

I am very happy to have Buddy Club in my life. Thanks to it I have found lots of new acquaintances from all over the world, thanks to it I can talk in foreign languages in a relaxed atmosphere and keep doing something I love: helping to solve issues, giving advice, and telling something new and useful. 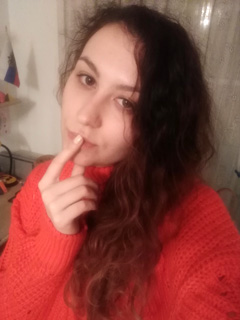 At the beginning of the 4th year I became a Buddy Club volunteer and I’m still here. I think that the club is very helpful and important, as we help foreign students to adopt to a completely different country. I was in their shoes once. When I studied in the 3rd year, I went to Spain as an exchange student. Unfortunately, I was not given such help like we provide here in the club.

After the graduation I devoted my life to foreign languages. I teach Spanish and English. Despite the work, when I have free time, I go volunteering at the club with great pleasure: I meet foreigners, help them, and arrange events. Our club not only helps people to practise foreign languages, but allows me to get lots of new acquaintances from all walks of life, and what’s more important – experience: experience of working with people, experience of communicating with foreigners, and, of course, experience of holding events. Now Buddy Club is my second family, and I am happy that I joined it! 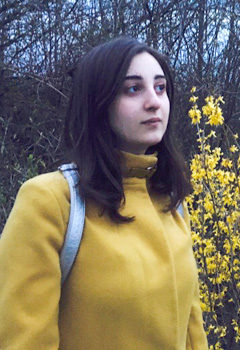 In general, participating in Buddy Club has improved my English speaking skills quite noticeably. I’ve got an opportunity to communicate with foreigners without any problems. Of course, it’s all connected: I have improved my language skills thanks to our club, and thanks to these skills I can directly take part in organizing events, run social networks, and promote Buddy Club to a new level with all our volunteers. I hope that in the near future I will see some benefits while applying for a job. 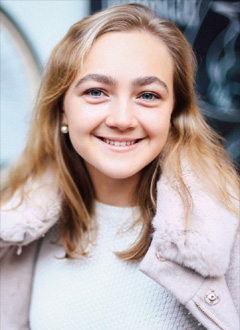 Buddy Club was a huge part of my university years. Thanks to it, I studied in Estonia as an exchange student, became part of the international community, and improved my spoken English. Working in the club is not just about meeting with foreigners, it’s actual work. Sometimes you are an organizer of events, sometimes you are a “manager” for an incoming trainee. It can all be noted in your CV. I started looking for a job only at the end of the 4th year, and the experience of volunteering turned out to be valuable – employers are always interested in what exactly we did at the club, and what skills I acquired there, especially if the job is connected with languages and interacting with foreigners. While I was in the club I learnt how to work as part of a team, to negotiate, and to solve problems in times of crisis. What I appreciate most is that I found friends who introduced me to different cultures. The international community is an environment for personal growth. So, this experience not only affected my student life, but also my career plans and prospects. 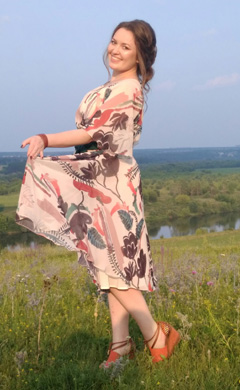 I started volunteering long before my activity in Buddy Club, but right here I got experience in organizing events, and later, as a manager, I also got experience in managing a budget and grant funds. The role of "buddy" for international students taught me to interact with the university workers on behalf of trainees, draw attention to deadlines and details, and to find a way out of emergency situations. Now I work as a teacher at university and I believe that my volunteer experience, knowledge of foreign languages, and experience in organizing events and communicating with trainees help me to develop my own teaching style. 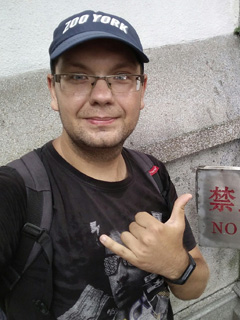 I got to know Buddy Club a little bit later when I had graduated from the university. Now I am working in Moscow in a company which deals with cloud technologies.

In general, while I was in the club, I made a lot of acquaintances from different countries and had the opportunity to practice languages: Chinese and English. When I was in China, I even managed to see a few friends. 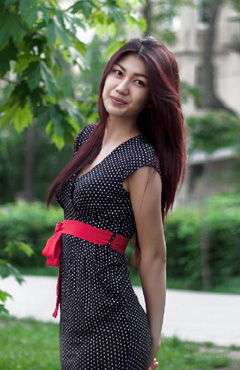 Now I am working as a business analyst in the IT sphere. While I was studying in Voronezh, I was Chairman of Student’s Council of Dormitory 4, Head of the Buddy Club, the representative of foreign students in the Joint Council of Students, Deputy Head of the project for pupils “The Key to Success”, as well as a volunteer and an organizer of various events.

Public activities helped me with my self-development. At the moment I am Vice-Chairman of the Korean Youth Centre under the Association of Korean Cultural Centres of Uzbekistan (248 participants), I am also a representative of the Korean Youth of Uzbekistan among CIS countries (Russia, Kazakhstan, Kyrgyzstan, Ukraine, Uzbekistan). International meetings devoted to the development and unification of Korean youth are held weekly. I have my own social project devoted to the English language. So, both public activities and studying at the Faculty of AMM gave me a good background. 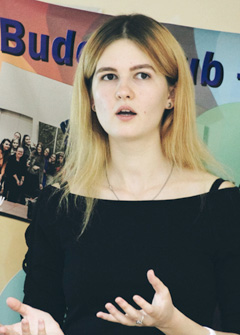 Working at Buddy Club helped me to discover personal traits that I didn’t know I had before, it also helped me to develop the skills which I already had. When I first came to Buddy Club, I thought that it would help me, first of all, to maintain a good level of foreign languages by communicating with students from different countries (I studied at the RGF Faculty, where I studied Spanish and English). But after a couple of months I realized that practising languages is just one of the possibilities for the Club's volunteers. In the course of organizing various events we had to look for non-standard solutions, be creative, and we often brainstormed with the guys at the meetings. Now these skills help me a lot at work – I teach Spanish and English at a language school in St. Petersburg, and I often use a game-based, non-standard approach in the lessons, which helps students not to become bored.

Buddy Club also helped me to decide which discipline for my master’s degree to choose. I chose a major in Translation at SPbSU (I had a major in Teaching at VSU) mostly because I had already been a kind of interpreter or translator at the Club many times, not only at events, but also helping trainees in their daily life (some guys come to Voronezh, hardly knowing Russian, betting that they will learn the material faster in the language environment, so they really need a "personal" translator). I had to translate not only when communicating with the university employees, while do some paperwork, or in a café, but also in hospitals and even at the police station.

I think that every volunteer of the club, regardless of what profession they choose, will be able to use the skills they have acquired there. The ability to work in a team and solve non-standard tasks, the habit of doing your work by strictly determined deadlines, and reacting quickly in unexpected situations will be helpful both in your career and life in general. And, of course, participation in such a large volunteer project is a great item for your CV. 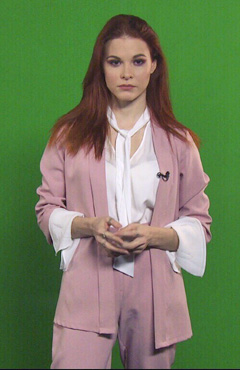 A year after graduation I moved to Moscow, entered School of Cinema and Television “Ostankino” for free on a grant, graduated as a television presenter, worked for two YouTube channels, one of which was connected with science and technology, and the other one was for teachers (Sky Teach – the YouTube channel of Skyeng School). I teach English at this online school and at the same time maintain the YouTube channel for the teachers of our school.

Apart from teaching English, I also hold some webinars on how to learn the English language from movies or shows, how to overcome the language barrier, and use slang correctly. Working at Buddy Club helped me, because we were already learning to communicate with foreigners at that time. I myself learned to overcome the language barrier when we went on different excursions. I still use the skills which I acquired. I also managed to work in Moscow as a coordinator for Rossotrudnichestvo, an organization that is engaged in the consolidation of different nations. It was useful to know the language and to be able to communicate with foreigners, which, to a certain extent, Buddy Club helped me to develop. 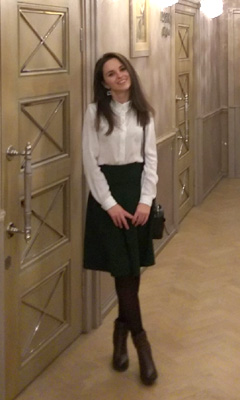 I remember Buddy Club from its very first day, as I took part in its foundation and helped foreign exchange students to adapt. Buddy Club became a part of my student life until the end of my graduation, however, I keep on attending events that take place within the club. Thanks to Buddy Club, I was not only able to develop various soft skills, improve my language proficiency, which to a certain extent affected my career (now I’m working in a large international company), but I also found friends. For example, I spent Christmas holidays in Estonia with my former students whose “buddy” I was lucky enough to become. 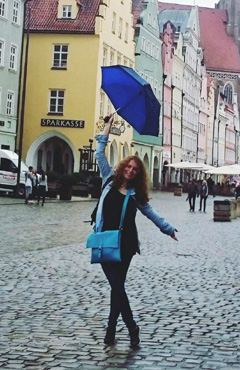 Voronezh State University, my dearest and favourite alma mater, marked not only my career start, international exchange internships, experience as a participant in social projects, but also the experience of independent "adult" life (study/work). I graduated from university in 2017. I finished my master’s program at Moscow Timiryazev Agricultural Academy in 2019. The experience of working with foreign students, my own participation in the exchange program and studying in Germany (the Albert Ludwig University of Freiburg) allowed me to create an Association of students from Uzbekistan at Timiryazev Academy, join Intersovet and develop the project called Timstudy, and even make this project a laureate and winner of the international award in the field of internationalization of higher education.

After finishing my master's degree, the desire to connect my life with science did not disappear, so today I am a post-graduate student at Vavilov Institute of General Genetics Russian Academy of Science, and I also hold the position of a science teacher at Valdai agricultural technical school.

I had the best department and the best teachers (Department of Biochemistry and Cell Physiology, Faculty of Medicine and Biology), and now, as a young teacher, I try to develop in students curiosity, scientific interest, and a consistent and methodical approach in their own research.

Buddy Club, with its language evenings, festivals, cinema and theatre outings, joint participation in quests and much more, allowed me, first of all, to overcome the language barrier and find wonderful friends who are present in my life after graduation.

Thank you to all the graduates-volunteers of the club!